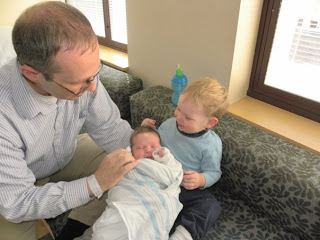 The complete miracle of new life is astounding. This is Eleanor at three hours old. Big brother Max is now 19 months. They seem to be getting along so far. 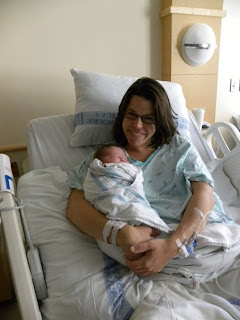 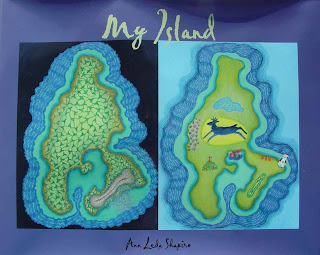 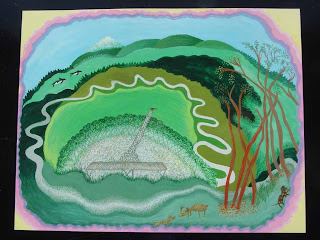 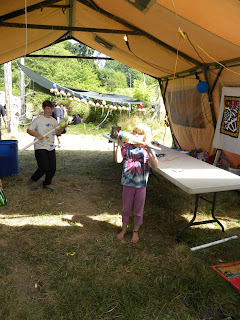 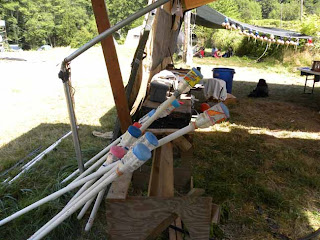 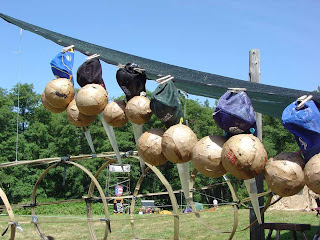 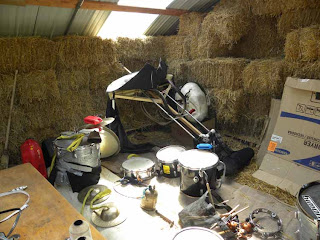 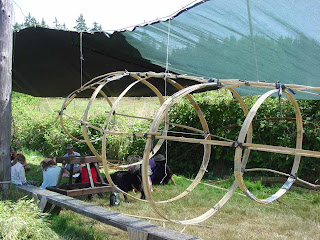 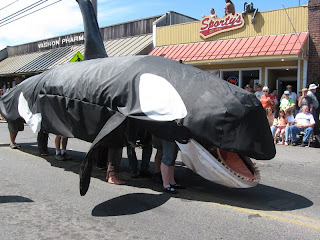 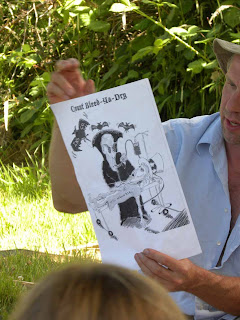 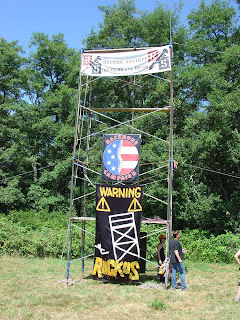 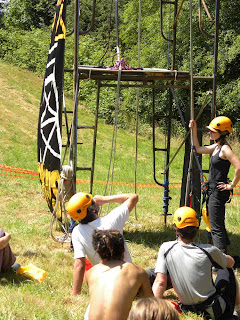 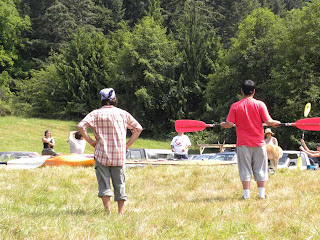 This is a great idea. Not just sports, but sports for a purpose. It can appeal to all those outdoorsy types who are politically liberal but don't know how to get involved.
These type of collaborations with specific issues are exciting and effective.
Backbone created the Procession for the Future which went to 16 cities and conducted 8 workshops, providing activist material like freeway banners, puppets and silkscreens. A lot of the focus for Backbone ( Backbone for the Democratic Party that is) is environmental these days. Goodness knows, that is really crucial. They list on the video of the Procession for the Future, how much we could do to save the planet with all the money wasted on wars.
This anniversary of the Moon walk today, just makes it all the more obvious that we have a precious, special planet and we need to stop, stop, stop being fools about how we live here.
Posted by Susan Platt at 6:07 PM No comments: 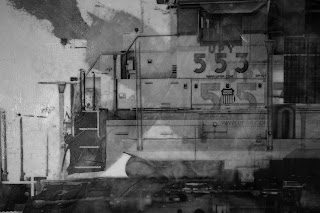 Last week I got out of my monastic isolation and thoroughly enjoyed First Thursday in Seattle. I talked with the folks at Revolution Books first, so I got an injection of hard core politics to set me up for the evening.They have a great show of photographs of the Winter Soldiers by Mike Hastie, not to miss either reading the book or seeing the photographs.
Then I went to The Monarch Gallery and met the director, Benito Rangel de Maria. I really like his complex train paintings,

see detail above and he showed us his studio as well. He is focusing on Latina/o art in Seattle. Brave man. Tatiana Garmendia is coming up soon, a fabulous artist whose drawings about men at war are technically and conceptually riveting ( disclaimer I wrote her catalog).
Then we ran in Elizabeth Bryant, a writer whom I greatly respect, and
a fun show of the work of Alice Wheeler at Greg Kucera's 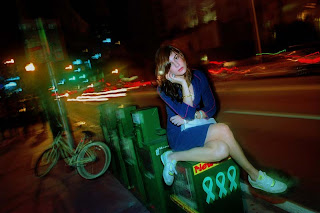 where I ran into Roger Shimomura. 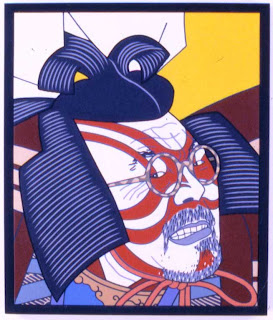 His exhibition is opening at the Wing Luke in early September.


We also stopped by the Pratt gallery and saw some great works made with recycled materials, although I wish Carletta Wilson had been included. Her works are dazzling.
Molly Norris has a show of her cartoons at Gallery 110. Funny and smart. 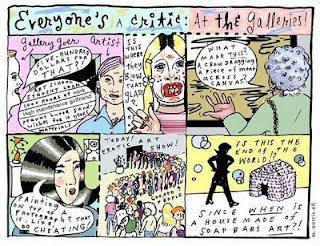 The second half of my title is not really on art and politics, but just a comment. Usually I devotedly and perseveringly ride the bus. Yesterday I had to do a lot of things in different places. The difference was dramatic. I saved hours of time, got to places in five minutes in stead of 60 minutes, no wonder no one with a schedule would ride the bus. But today, back on the bus, I realize how much I love seeing all kinds of interesting people, being part of a community, talking to people. It is an experience that is in the city. Riding my car I was in my little box, fighting with everyone else to stay alive. So the art in this half of the post is the art of people just living their lives and being human beings, rather than the sterile experience of freeways and their debilitating stress.
Posted by Susan Platt at 11:13 AM No comments: 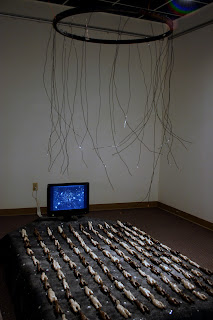 This piece Souls Awaiting a Future from John Feodorov's recent show "Ambiguities" at South Seattle Community College Nat 18 - June 19, 2009 looks straightforward. The title tells what's there. But actually, in the context of John Feodorov's work it is both funny and subtle. The souls lying on the floor flat are wobbly, perhaps in some in between state of being. There is a celestial television projection, as well as stars hanging from wires. There seem to be four realities at least at work here, our own ( and what we bring to the work in terms of belief systems), the clay in betweens, the video of outer space, and the wires hanging form the ceiling with small stars at the end.
Feodorov questions our assumptions with humor and humility.
He was raised in Whittier California as the son of a fundamentalist. He travelled with his family to the Navajo Reservation to visit his grandparents and relatives. No wonder multiple realities are his focus.
He also has a particular riff in store for new agers, particularly those who borrow Indian elements for personal spiritual quests.
In his recent show in Bellingham he also showed disturbing pseudo spiritual installations 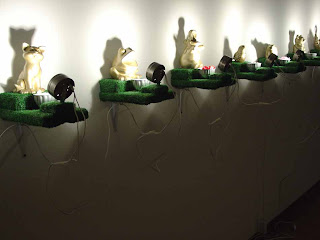 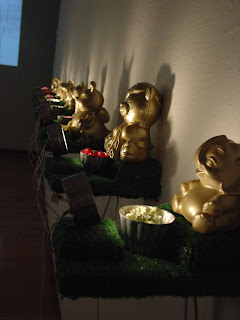 The South Seattle Community College show included a video called "We're Feeding the Gods" dancers performing what appeared to be a type of ritual dance, but they are in a kitchen and other odd, random places, some of them pseudo beautiful. It is a real dance, but we can see that the context as it changes makes the dance seem pretentious and hollow. Perhaps that is John's attitude to institutionalized religion as well as New Age practices. 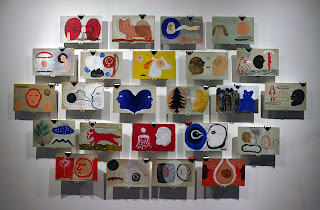 Also in the show is the Alphabet group of small works. Some have his characteristic puffy cheeked silhouette ( the artist ?) with various eccentric tableaux. The more you look, the more you wander off into some crazy land where nothing is quite as it seems. 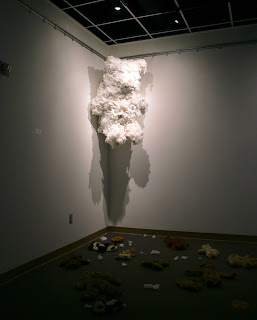 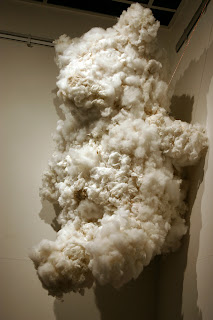 Dominating everything is the teddy bears, a theme John has taken up before ( see an example of his Totem Teddy here) , early in his career. In this show at South Seattle Community College there are a lot of empty teddy bears on the ground and their stuffing has been put together as a giant teddy shaped apparition, as though the ghost of all discarded teddy bears is collectively haunting us, and lurking behind that ghost is the real bear, an heroic creature, outraged by this travesty of cuteness for his grandeur. 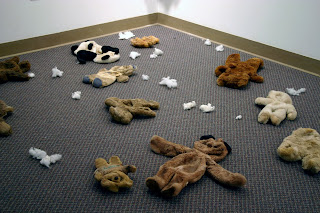 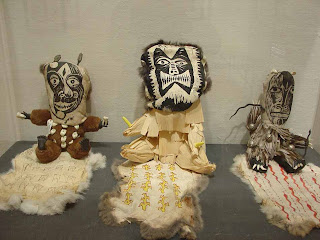