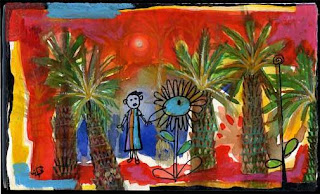 Since I am on the subject of books. Iraqi Women is another crucial book. The subtitle is "untold stories from 1948 to the Present" . Nadje has interviewed a cross section of women who left Iraq at various times ( some only briefly), provinding one window into the history of Iraqi women since the 1940s, with a brief look backward to the early twentieth century. It discusses the incredible support for women provided in the 1970s, professional training, child care, good salaries, transportation to and from work. A model of what a society can do that trully wants to support women as full human beings. But already in the 1980s the situation changed, during the Iran Iraq war, when women were encouraged to produce babies, and in the 1990s, during sanctions, problems escalated exponentially. Since 2001, everything has gone down hill to the present almost total destruction of the country of both the past, present and future of the country as Reshad Selim, another major Iraqi artist puts it.
This painting is by Maysaloun Faraj, the artist and director of Aya Gallery London.
The title is Weeping Palms, Stolen Childhood, 2004
Posted by Susan Platt at 2:52 PM