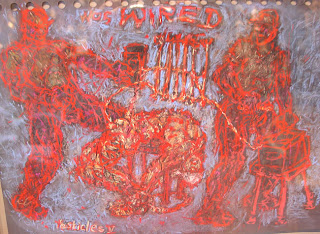 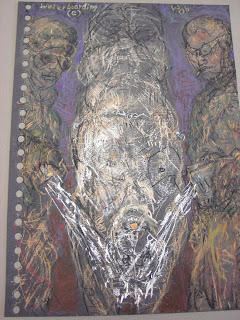 These are only two images from the most recent Wall of Perpetrators by Selma Waldman.
The Wall consists of a total of 40 images all drawn on black perforated paper.
The intense chalk lines are bearing witness to the atrocity of the torture.

The top drawing in red and blue chalk on black paper is Testicles V
The prisoner is sprawled helplessly over a stool with his hands shackled to his ankles.
He is being given electric shocks by two soldiers on either side of him. His body arches in pain. One soldier holds the wires directly to the prisoners testicles, the other sends the shock from a box.The red is the red of fire, of electricity, of pain, of torture
The second work is Waterboarding. It is one of six images of waterboarding in the series. Each one specifically describes the process with detailed writing. Waldman carefully researched exactly what happens during water boarding. She forced herself to penetrate to the factual heart of this darkness and to represent it. This one shows the prisoner on his back, shackled as two soldiers on either side simultaneously pour water on his face, which is covered with a cloth. The soldiers stand resolute, one is smoking a cigarette, the other looks fixedly at the stream of water and the suffering prisoner with no expression. The white is the white of drowning.

The other waterboarding images have texts
"strapped to board upside down
immersed in wet towel to fake drowning
used to impose anguish without leaving marks. "

The image above is the last image.
All of these acts are present. Look at these works and think about the loss of humanity for all of us as these acts are committed. They must be exposed in order to be understood and protested. Just below this is my grandson. All of these prisoners and all of these torturers came from a mother's pain and joy and love. How did we all get from there to here. We must stop this inhumanity.
Posted by Susan Platt at 3:01 PM

Hi, this is not so related to your page, but it is the site you asked me 1 month ago about the abs diet. I tried it, worked well. Well here is the site