Ghiberti's Gates of Paradise in Seattle 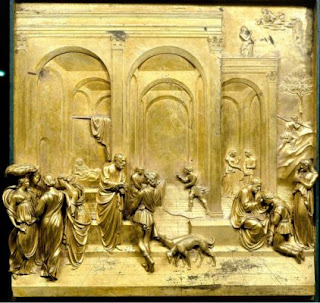 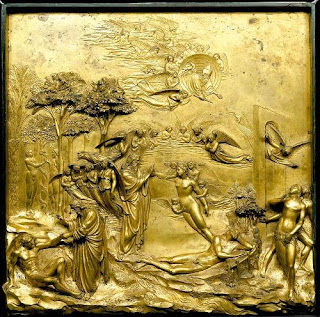 Three panels are shining in the depths of the Seattle Art Museum, the Birth of Eve (bottom)
Saul and David (not pictured) and Jacob and Esau (top)
Their glowing gold surfaces have been restored by new technologies, this is the last time they will be seen outside of Italy. Some have been suspended in a chemical bath, others cleaned by lasers. The result is an entirely new experience of the doors.
We can see both the front and back, we see the detailed anatomy, complex spatial arrangements, sequential stories, landscapes, animals, birds, trees, hills, buildings, all in original new perspectives. Ghiberti found new ways of telling old stories and working with bronze. On the back we see the bronze with its undulations that mark the high and lower relief.
The ten panels of the Gates of Paradise were commissioned by the Guild of the Calimala with the support of the major merchants in Florence. Ghiberti's salary was "equal to that of a manager of a Medici bank." The cost of the panels was immense, tens of thousands of gold florins. They are the second set of doors created by Ghiberti for the Baptistery in Florence, and famous for the fact that he opened up the design into large squares of narrative.
The wealthy merchants of the community believed in commissioning modern art to call attention to their city. These gilded doors were the most sensational example of that idea. They are the same idea as Donald Trump gilding St. Gaudens 19th century statue of Sherman on horseback in the lavish 1980s. But the difference is telling. Trump is a contemporary merchant who used his personal fortune to restore a nineteenth century statue of a brutal military leader. In our country the government has little regard for contemporary artists, it does not fund individual artists anymore. The NEA actually was a funder for this exhibition of Renaissance art, the result of cultured business men from 500 years ago.
So what does Ghiberti show us?
no 9 Saul and David: David is killing Goliath by chopping off his head in the foreground, we forget that the famous sling shot didin't actually kill Goliath, just stunned him. Ghiberti has pulled no punches in this gory scene.
This is the most Roman in style of the three scenes on display. Since the Romans were really good at invading other countries in rows of soldiers, it is a natural reference for this battle scene as well.
no.5 Jacob and Esau is the story of Betrayal, the story of the younger brother in cahoots with his mother stealing his brother's blessing from his elederly blind father Isaac by wearing an animal skin that made him feel hairy like the older son Esau whom his father preferred.
no 1 The creation of Eve. The almost floating body of the nude Eve with a small angel pointing to her reproductive organs is the center piece of the story, the serpent is in the background, the creation of Adam, favored later by Michelangelo, is off to one side. It is the beautiful Eve, as predecessor to the virgin Mary who is celebrated here. But the next panel which didn't come to Seattle shows the next stage of her life, her older son Cain, killing her younger son Abel: Fratricide.
Other scenes not included in Seattle are Noah's Art, where the foreground image is Drunken Noah, rather than the orderly two by two parade that we are all used to, Sacrifice of Isaac,
(Abraham about to kill his own son),and Moses and the covenant. The story of Joseph is about betrayal, jealousy, and retribution.
Joshua is the story of the destruction of Jericho.
Lots of battles. lots of betrayals, lots of attacks on non Jews
The end is Solomon and Sheba, the peaceful coming together of Jews and Gentiles. The Queen of Sheba was from the lower Arabian peninsula. Solomon had 700 marriages, but this was apparently only a meeting of equals not a seduction.
Ghiberti begins with a celebration of Eve and ends with honoring the coming together of peoples who are different. He has overall a peaceful theme, in spite of all the betrayals, battles, and deceits.
Too bad, the Old Testament can't be interpreted like that by everyone today, with the final message of peace .
Posted by Susan Platt at 6:37 PM