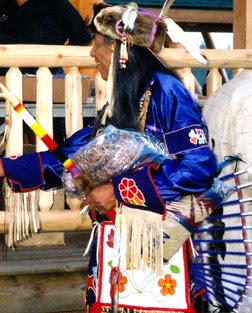 This PBS series in five parts is trying hard to tell us a new history, American history from the Native American perspective, as in they were friendly, smart, brave and strong and we wiped them out because we were stronger, ruthless, perfidious, and really really greedy. It includes a lot of re creations, Indian languages, history that is unfamiliar. It only has photographs when it gets to Geronimo, the fourth and best of the series so far. At least it pointed out that Geronimo really ruined his whole tribe and they don't love him for it. Also that he was not even a chief at all, really a renegade. But the best part was the instant switch on the part of whites from fearing Geronimo to making him into a hero of the lost wild West.
This week is Wounded Knee.
The big problem is that they have left out the communal character of Indian culture, the importance of women, the role of shared resources rather than ownership of the land. Very brief references are made to selling their land, but no explanation of the fact that that is an alien concept in Native cultures. Also, the important role of women is ignored completely, This is great man history with Native male chiefs as stars. Is it that we can't take too much at once, women and Indians? Community sharing and social cooperation?
There are many Indian cultural consultants, but still it is the same old PBS formula and the same old American History formula.
The Wounded Knee segment was by far the best! It covered the gap from late ninteenth century to the present, with references to the damage of the boarding schools, and the urbanization policies, then the radical coming together of Indians from all over the US at Wounded Knee with amazing footage. No re creations here. Interviews with participants ( men and women) many of whom are well known now. Of course the present chapter is different again, but the revival of Indian cultures certainly started at Wounded Knee.
They are making huge comebacks. The website for the exhibition does talk about that and the image above is from that discusssion called "Native Now". The website has a lot of interesting information, but still no discussion of women or alternative perspectives on the earth, like the fact that natives are the primary ecologists of our history.
Posted by Susan Platt at 7:41 PM

Email ThisBlogThis!Share to TwitterShare to FacebookShare to Pinterest
Labels: "We Shall Remain" PBS