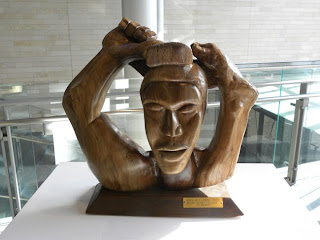 This is the sculpture of Roosevelt Lewis who is featured in City Hall with sculptures and paintings in the main lobby. Roosevelt Lewis is a Seattle artist with roots in the Black, Creole, and Cajun people of Louisiana, a place near the Cane River of intensely mixed cultures. This piece is called Do No More Violence to Women.
It honors the women of his family and all women as they stand up to violence in our society. 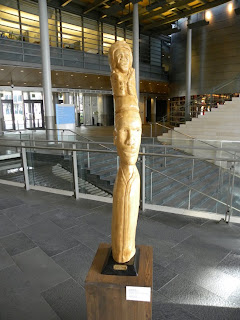 This sculpture is called Generations. You can see one generation rising out of another in the single carved poplar log. The sense of a connection over time, suggests his deep connections to his past generations in Louisiana 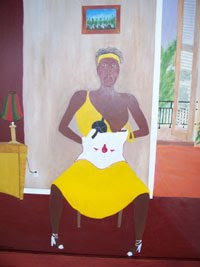 He is also showing paintings what might be called a folk art style by mainstream critics. He is self taught and began making art by scavenging in dumps as a child in Louisiana. He had no library or art works to look at. When he was in the army in France he saw African art for the first time.The forms of his paintings are simple and flattened, his sense of color and space aligns with the work of Jacob Lawrence ( see below) as well as somewhat like Matisse. What makes the difference between what is considered folk art ( unsophisticated) and what is considered so called fine art? Of course for a long time people characterized Jacob Lawrence as a folk artist. 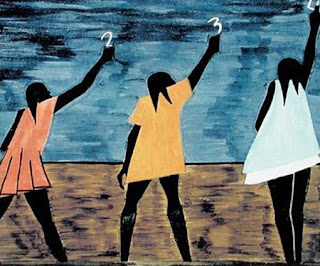 What is exciting about the exhibition is that it is an intervention in City Hall as you can see in this installation shot. Lewis is prominently displayed in the main lobby. On the balcony above ( which you can't see) are black and white photographs of white men lined up in rows. 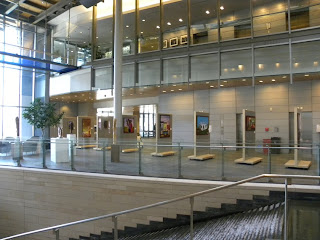 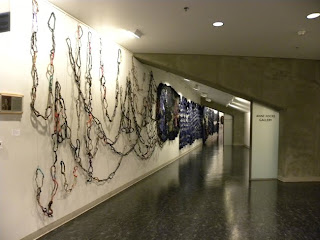 This is Marita Dingus's well known work "Buddha as an African Enslaved" inspired by her visit to China in 1995 when she saw a gigantic Buddha statue. She chose to put work on a lower floor so that Roosevelt Lewis could be prominent in the main space. Her sculpture is experienced from a very close perspective as you walk down a narrow hall. I think it is hard to appreciate it from such a close perspective, but you can see in detail the way that she uses recycled materials.
Black History Month. Yes, it is true that we still need it. Our society does not yet have an integrated public discourse. So lots of focus on African Americans this month is providing us with some important insights, especially in the age of Obama. I have been hearing on our community radio station a lot of discussion by middle class black professionals about Obama. They are suggesting that he show more spunk and stand up to the pressures on him. Of course, they support him, but they wish he would be willing to be more of a leader and drop all of the bipartisan emphasis. I see Obama as surrounded by incredibly powerful forces. We can't expect him to change everything single handedly. We have to get out and shout for what we want. No more war, single payer health care, peace in the Middle East. Black man in the white house or white man in the white house, we still have to get out and shout. These exhibitions remind us of how much of our country's heritage is hidden from sight. So are many of our good ideas. We can't let the oligarchy or the tea party make off with our real identity as an energetic, diverse society.