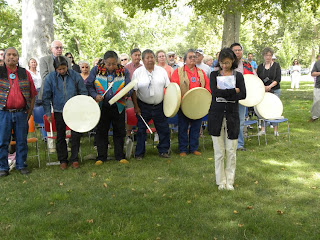 At the dedication of the new Confluence Site in Sacajawea State Park in mid Washington State (now pronounced Sacagawa), Maya Lin is standing in front of drummers from the Confederates Tribes of the Umatilla Indians, at their invitation. It was a thrilling and sacred dedication. There were a lot of eloquent speakers, a trumpet piece, poetry, and eloquent indigenous speakers (including Anton Minthorn and Bobbie Connor, in a photograph below) but this drumming was by far the most profound moment. The drummers saluted the ancestors of present-day tribes, their spirits in that place, and their history. Right after I took this photograph, the Native drummers asked us to not take any more photographs, so we all simply listened and experienced the connections to the past and the future. We heard incredible music and singing that seemed to come from the depths of the earth itself.

The shape of their  drums is echoed in the seven "story circles" that Maya Lin created at this site, the confluence of the Snake and the Columbia River, two mighty waterways.

Indians gathered here in large numbers for centuries, for trade, story telling and for ritual celebration. This is site no. 4 to be dedicated in the Confluence Project. Maya Lin was invited by Native leaders in 2002 to commemorate the loss of Native cultures as a result of the  Lewis and Clark expedition because they were so impressed by her work at the Vietnam Memorial.

At other sites, Lin has been quoting from the Lewis and Clark journals that meticulously noted flora and fauna as they progressed down the Columbia, as well as the villages and tribes that they encountered. The extinction of much of what they say, including Indians, villages, and the natural world, is a theme of the Conflucene Project. At this site, Lin focused on the Native traditions.

She was intrigued that when L and C came to this Confluence they spent only a short day or two here, whereas, for native peoples it was a site of great importance and they tribes spent months here. 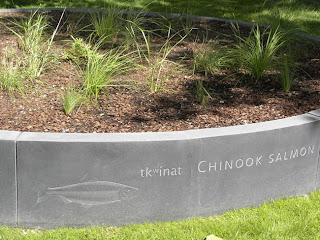 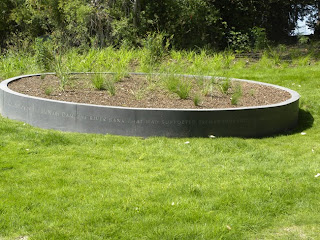 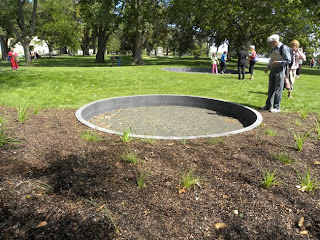 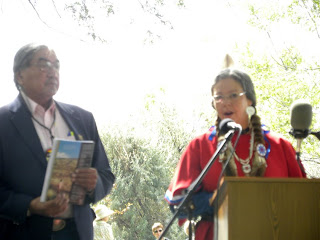 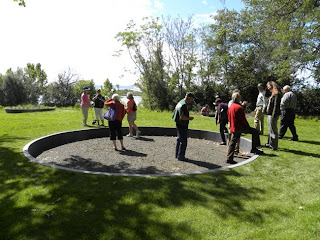 The shape of the circle echoes the shape of the drums, and their sound enveloped us creating a sense of community coming together.
It was a very moving experience.
Posted by Susan Platt at 7:18 PM