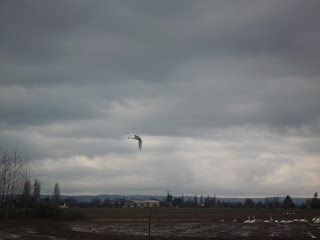 This is a trumpeter swan flying. They make an amazing sound, which is why they are called trumpeters. The white spots on the ground are more swans.They do an intricate social ritual arching their necks that was fascinating. We saw hundreds of them in the Skagit Valley. As well as hundreds of snow geese and thirty other birds including Kingfisher, Blue Heron, Bald Eagles, Red Tail Hawks,  Bohemian Wax Wing - but now I am getting technical. I know nothing about birds. I was with two experts who identified what I called little brown birds. But I was good on the big white birds!
And the thrill of seeing so many birds is wonderful. IT awakens all of your senses to spend a day gazing at the sky, listening for bird sounds, an extraordinary symphony of sound that we blot out of our lives. Trumpeter swans migrate to Washingston State from Alaska, the snow geese come from Rangel Island where they have covered the island and eaten everything in sight. In the 1930s they were endangered. Which goes to show we can save the earth if we decide to.

. As we crossed route 20 hundreds of cars were headed to the mall. If only they would stop and wonder if they really need anything from there, get out and look at the birds and listen to their songs, they would have a free day of joy!

Take a look at Maya Lin's project What is Missing? for a sobering look at the escalating species and habitat loss we are causing. As she has said, we are in the midst of the sixth major extinction in the history of the earth, and the only one caused by a single species, humans.

And pursuit of fossil  fuels is only getting more and more ferocious in its destruction of the earth. The precious Boreal forests in Canada for example, are being destroyed in the pursuit of tar sands. Rising Tide North America are a group of activists fighting this project, but the general public has no clue.
Posted by Susan Platt at 5:45 PM