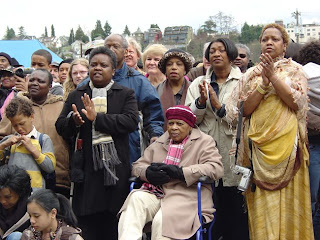 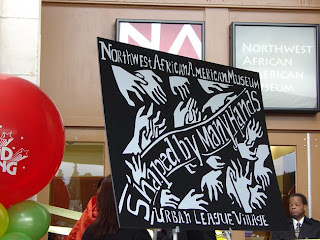 After so many years this was a landmark event. It began with eight years of sit ins by Wyking Kwame Garrett, his father and many other activists who saved the building from demolition at the time of the construction of the I 90 tunnel lid. Then it went into a transition when the city planned to sell it to this group, but then backed out ( according to the activists). Finally, in 2003 the Urban League took it on and brought it to fruition, complete with low income apartments.
Barbara Earl Thomas as Curator 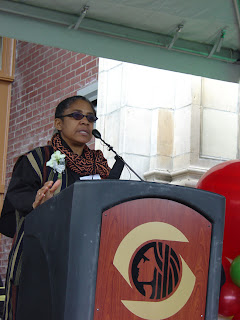 was a central spirit in the final creation of the museum, and she presented a brilliant metaphor at the grand opening. It is like the pickle jar at Thanksgiving she said, as it passes around the table each person tries to open it, until finally the last person opens it easily. She declared that the Museum was the work of everyone there.
The galleries include the Journey, which tells the story of Northwest African americans journeys to the Northwest in so many ways, and their accomplishments once they arrived. Two art exhibitions, Making a Life, Creating a World, feature Jacob Lawrence and James W. Washington Jr. and finally there is a superb cafe and gift store.
It is a thrilling beginning. Programming and future events are in the works, primarily a benefit for the Museum education program next Sunday night honoring Quincy Jones at the Paramount Theater.
At the opening Wyking 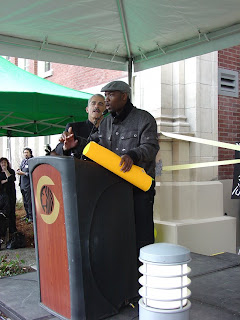 came to the podium and decried the museum as a sham because it did not address directly the current problems of black youth. He was asked to leave and eventually even put in jail, which is way over the top and not appropriate at all. But perhaps if he had gone inside, he might have felt differently. The inspiration of seeing Black History on the walls, and the amazing accomplishments of so many talented people was thrilling and the large crowd obviously felt that way as well.

The politicians turned out in force. Here is Maria Cantwell shaking the hand of someone yet to be identified, behind her Jim McDermott, Ron Sims, and even Gov Gregoire spoke, although she doesn't show up here. 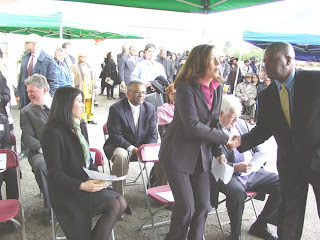 Carver Gayton is the executive director. 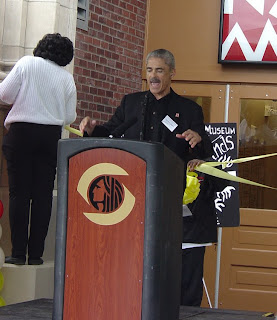 And everyone was happy ! 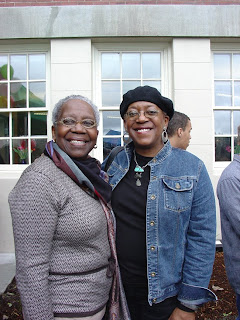 See the next entry for the inside