Oscar Munoz at INIVA in London 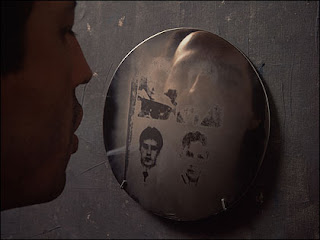 Oscar Munoz is from Colombia. He speaks of the fact that violence has permeated all aspects of life for many many years in Colombia. He contrasts that to Chile, Argentina and Brazil in which people disappeared in a fixed period of military dictatorship. In Colombia it goes on and on. He does not divide some violence from another,

He invokes disappearance and the ephemeral aspect of life in all of his work in many poetic ways. Breath shown here is one example. As you breathe on the steel disc the image of people who have died appears and quickly disappears.
Breath of life, breath of death, first breath, last breath. Disappearing is a breath in a mirror, obscuring itself.
Other works 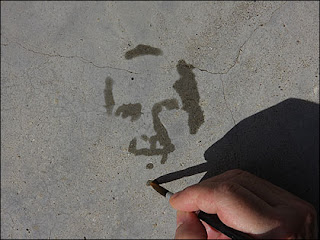 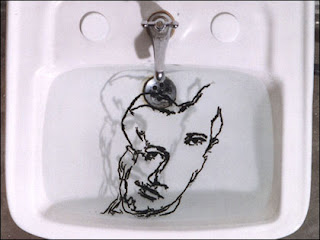 The image again disappears in different ways, in the first he has painted images in water on a sidewalk based on photographs in obituaries. As the pavement dries the drawing disappears. In the second he has "silkscreened" with powdered charcoal through a screen on water, and it gradually disappears down the drain. In both cases the disappearance is slow and inevitable.
One of his most recent works, not pictured, is Line of Destiny 2006, in which his own reflected face appears in water in his palm, and gradually seeps through his hand until it vanishes.
In each of these works as well as in an installation using newspaper pages that he has burned with the tip of a hot wire in a screen pattern that makes the pages illegible, the disappearaces are continuous, perpetual and unavoidable. We can fix nothing, we can freeze nothing, reflections disappear, newspapers are destroyed, In this work is pervasive sense of the futility of life, there is the loss of memory itself. It reminds me of the novel Hardboiled Wonderland and the end of the World by Hurakami, in which the loss of memory is the loss of imagination, emotion and life itself.
The exhibition is at the Institute of International Visual Art, London,