The People's Summit in Seattle and Climate Change in Copenhagen 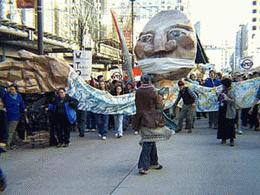 Two weeks ago in Seattle there was a group of people who were preparing for Copenhagen - they were looking back to N30 ten years ago in Seattle and looking to the future planning for the planet. Alli Chagi -Starr told us about her Art and Revolution Another World is Possible Road Show that promoted the anti globalization protest in Seattle. That is her giant puppet above from the original Seattle anti globalization protests. It represnets an corporate octopus that has been muzzled. There were dozens of giant puppets there.
Dena Hoff as a farmer talked about La Via Campesina, the international peasants movement for food sovereignty, a group that is in Copenhagen joining the mass actions as seen in this image 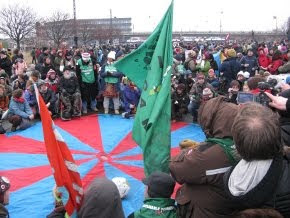 Also speaking was Jihan Gearon of the Indigenous Environmental Network. Jihan is a young woman who is with that group's Energy and Climate Program and networks with tribal nations to give them support for better solutions and green economic opportunities (instead of the historical opportunities for indigenous peoples to destroy themselves and their culture through accepting jobs in mining coal, oil, and uranium on the reservations). Jihan is talking about where we are now. As she said, we are all going to have to face the lies: we cannot buy our way out and we cannot stop climate change without changing our lifestyle. We must move away from greenwashing ( like carbon offsets) and toward protecting what we have left. The Indigenous Environmental Network is much in evidence in Copenhagen. Thank goodness. They really know what they are talking about. One of the big campaigns is against Tar Sands in Canada.Watch this amazing video. There was a die in in Montreal. to support them. 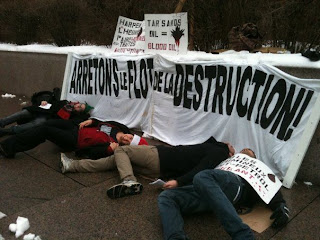 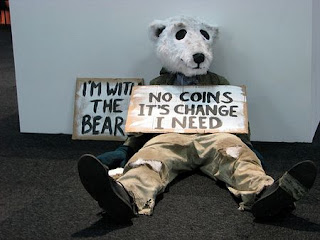 It is hard to believe how violently the UN and the Danish police are treating both protestors and legitimate participants in the Climate Change conference. This bear is from the Backbone Campaign in Seattle, but the fact that thousands of protestors are being arrested and legitimate groups like Friends of the Earth International are being expelled from the conference, is hard to understand. Could the UN be afraid of the people of the world?

Olivia Zaleski has some good posts about the conference covering youth, grassroots organizing, and exactly how the anarchists were simply a small group who were intentionally disruptive.within thousands of peaceful protestors Amy Goodman has interviewed NNimmo Bassey, Nigerian leader of Friends of the Earth International as he was being expelled from the conference. Today was a plan to "Reclaim Power".
Is this what it has come to, complete alliance with corporate interests and despoiling the environment? And what about Denmark, it has entirely lost its image as a happy place with socialist leanings ( it was pretty shaky already after the incident of the Mohammed comic book a couple of years ago). We see fascist looking police beating up and putting plastic cuffs on protestors, preemptively arresting thousands. This is incredible. The future of the earth is obviously in the hands of the corporations who have no concern at all except their own profits. They don't seem to get the fundamental principle that the earth is finite.
Posted by Susan Platt at 3:12 PM