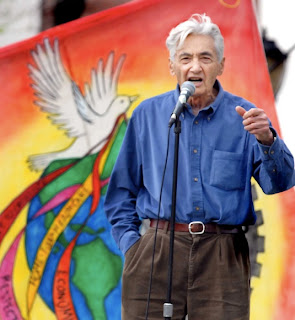 Irreplaceable, outspoken voice against fascism. He never stopped speaking up. He is an example for all of us. Like Edward Said, his voice will be heard through the next generation of people he inspired. Terrorism and War 2002 is the book I have read most closely. Written right after 9-11 it zeroes right in on the gigantic military budget and the fact that it has "absolutely no effect on the danger of terrorism. If we want real security, we will have to change our posture int he world - to stop being an intervening military power and to stop dominating the economies of other countries. "
Posted by Susan Platt at 3:36 PM