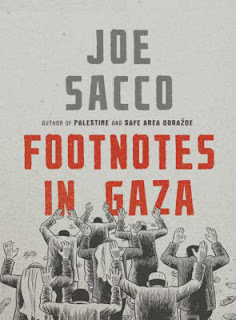 Joe Sacco is profoundly engaged with the experience of war in his new book. It is a major work of art, a telling of the Palestinian Israeli conflict from the ground in Gaza, a layering of time frames, a balance of personal ( not his experience, but that of fighters and families in Gaza) and political. I haven't read the whole book yet. It is so important that I re-read most pages three times. First for the text, then for the images, then for the ideas. He alternates between large landscape scale images and close up heads of people he talked to, old fighters, survivors of massacres, from decades ago. Sometimes he has a sequence of smaller heads or a family scene. The scenes of families trying to live their lives in one room for twelve people, or having another child because the father may die are heartbreaking.

The stories that the old soldiers tell, of their house being invaded by Israeli soldiers in 1956 and the mass murder of young men, simply lined up in a square and shot, are horrifying. These men escaped through luck ( they didn't quite die, when the Israelis shot them over and over, or they ran away), but so many didn't. Sacco gives us the up close experience of war, hatred, civilian confrontation. Sacco offers no solutions, although he is obviously aware that these people are pawns in political power games, but in depicting the house on the inside, or in one case we are in the line up of the men about to be shot, or we are seeing the devestation from above, we are somehow there. Not really of course, but more than in a photograph, a novel, or a painting.

Joe Sacco came to Seattle to speak about his book. One friend of mine described his presentation well "he spoke with the precision of a diplomat, walking through a minefield with a book balanced on his head." On my first impression, Sacco was understated and modest in his presentation, there was no heavy emotional load on the talk ( only one questioner said what we were all feeling, all the nightmare of the injustice). But then, I thought, he has so much in the book that he doesn't need to be emotional, and if he were it would have killed him long ago.
His survival is based on his care. His care in research, in protecting his sources, in negotiating war zones, in his brilliant art.

This book is a must read. It is far more complex than his 1996 book Palestine, which was more personal and had moments of humor. This book is set deeply inside Gaza framed around two massacres that occured in 1956 in Gaza, in Khan Younis and Rafah, but giving us backwards and forwards the conditions on the ground for people in Gaza. It was completed before Operation Cast Lead, or at least that atrocity is not cited in the preface. But the devestation it depicts is the same as that of any military conflict of soldiers killing in villages.

The first shock was the image of people literally digging in the sand to find shelter in 1948 when the refugees first arrived. Then the image of them crossing over the lines of Israel to their former land and being called "infiltrators." Then the fifties style development of housing by the UN, and now the seasoned soldiers who have fought continuously since the 1950s, understanding that the new battle today is beyond their human capabilities to fight, it is about the Israel/U.S. sheer technical killing power with machines.

Sacco wants to make sure that history is not entirely written by people who forget the early massacres that planted the seeds of hatred, as he puts it, quoting from one old man who was a child in the 1950s and saw his uncle die. As Sacco succinctly put it, it is as though the Battle of Britain has been going on continuously to the present day. There is no time for people to recollect, record, they have been in survival mode since 1948. He knows his book can't really change anything. There are huge powers at work that he cannot affect. But at least we can all know more about the history of this horrible conflict, as the last escape hatch is being sealed by Egypt and Israel with a fence manufactured in the United States.

We all share in the war crimes. We are paying for the equipment. Our support for Israeli military operations this year is almost 3 billion.

Read this book. there are lots of reviews and discussions on line. Here is an example