Eco Art Back to the Future 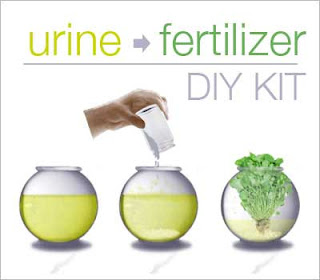 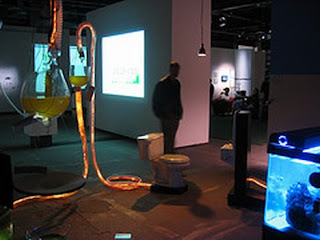 Rebecca Bray and Britta Rile have a provocative piece written up in the special ecology issue of Art News
Called Drink PeeDrinkPeeDrinkPee 2008 ( the title doesn't quite fit the smartness of the work)
it uses urine and light to illuminate what happens to that stuff you flush down the toilet.
In their art work it grows algae in a fishbowl.
Urine is full of phosporous and nitrogen, an excellent fertilizer for the earth, but bad for the marine world.
The artists have produced kits for $15. that allows people to make plant fertilizer from urine.

So why back to the future?
Because on the same day that I read about this art work, which I commend, I also read Paul Kane's Wanderings of an Artist Among the North American Indians, in his discussion of the Chinook Indians practices in the 1840s, before we took away all their land in 1855. " Chinook olives.. are prepared as follows - About a bushel of acorns are placed in a hole dug for the purpose ...covered over with a thin layer of grass on the top of which is laid about half a foot of earth. Every member of the family henceforth regards this hole as the special place of deposit for his urine. . In this hole the acorns are allowed to remain four or five months before they are considered fit for use. However disgusting such an odoriferous preparation would be to people in civilized life, the producet is regarded by them as the greatest of all delicacies." 128

So urine as a fertilizer is nothing new.
Urine contains all those birth control pill hormones, all those millions of dollars of drugs everyone is taking, and it is all being passed right into the fish in the sea. In the Northwest we get salmon with strange sexual characteristics from the hormones that we are giving them.

One of my big obsessions is garbage and sewage and water and how we just dump everything out of sight. I like this art work because it is making visible a process that we don't even think about.
Posted by Susan Platt at 2:09 PM