Global Warming and the Art World 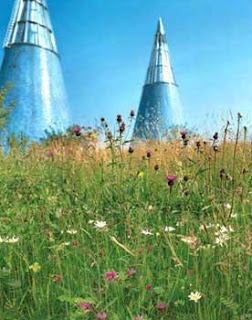 Well, I have been thinking I need to get onto this subject. It is SOOO much in the news right now.
So what do we have to show for the new trend.
Really, it is the same artists, the same strategies, the same work, with a new trendy title. There seem to be about three basic approaches: illustrate it, correct it, or educate us about it.
I am not denigrating a single artist who tries to address the environmental calamity that this world is becoming!
What is sad is that there is so little effect from this type of art. It is the suburban part of the art world in some ways. Artists who are concerned about the environment get funded to make something out in nature, about nature, or for nature. Some of these works are terrifically interesting. One of my favorites is Lynne Hull who is based in Colorado. She does research and makes humble pieces in the land about habitat loss. For the exhibition Weather Report Art and Climate Change she made highway signs
"Wildlife Warning Global Warming /Got Water?" This is not one of her most subtle works. She says that she creates "trans species art and sculpture for wildlife"-that is the part I like. She makes, for example, "raptor roosts" for hawks so they won't nest on electric poles and get killed.

Weather Report is a perfect example of repackaging the same artists with a new brand and for good luck throw in the more recent trendy artists. It was curated by uber famous engaged curator/critic Lucy Lippard, who lives OFF THE GRID -it doesn't get better than that does it- in New Mexico. So it had a big advantage over anything in dirty old New York City (but I read that New Yorkers have a much lower carbon footprint than most people and don't forget Lucy has to drive and fly a lot to go anywhere).
No one comes close to the work of Helen Mayer Harrison and Newton Harrison, (that's there work in the picture about the "endangered meadows of Europe from the late 1990s), who have been working for decades to address and reverse environmental damage. Helen as a sociologist and Newton as a sculptor network with all sorts of different kinds of people, scientists, politicians, community groups. Networking is the model that works in my opinion.
Weather Report was all about artists talking with scientists and getting together on what to say in a visual way. It was a good idea. But of course it was in BOULDER COLORADO. Lala land of consiousness, liberal, hipness. And how much carbon was burned getting all of those artists over to Boulder to install their ideas.
But I do have to say that the virtue of a lot of these pieces was their simplicity (disclaimer I didn't see the show, only the catalog). Like Brian Collier's "Why is the pika worried about climate change" That is a tiny alpine animal that is going extinct because of climate change, He created a pika alarm triggered by motion and postcards with photographs of the pika.

So where does all of this lead us? Artists are mostly environmentally aware in a liberal sort of way, that is, like political liberals, they hate to think of pollution destroying the world climate, but they drive everywhere in their cars, use lots of electronic equipment and ink jet printers, etc.

That's why I think Natalie Jeremijenko is the real thing for right now. In a sample entry from her blog titled "how Stuff is made" she comments on an article that links violence in the Congo to Sony Play Stations because the heat conducting material in Play stations Coltan drives demand for it and is mainly from the Congo. This is the type of connections we need.
As I sit at my mercury containing computer, burning a lot of electricity, I am contributing to global warming every minute. Jeremijenko has a clinic where she tells people what to DO, how to ACT, to make a difference in the problem of environmental deterioration. Connecting to ACTION is the key.

SO quit flushing the toilet all the time, save those paper towels for re use, don't get carry out, and try to use the car less. All easy to do. But just last night I accepted a styrofoam containerwith the rest of my Mexican Chimichanga
in spite of all my principles. By January they will be illegal in Seattle though, so the government has actually done something helpful.
Posted by Susan Platt at 2:32 PM

and plastic bags at the supermarket, I often forget to bring my purchased PCC bag with me, so on the styrofoam box side of things, I understand, and am making changes myself, and hopefully others are as well. I ride a scooter now, more than driving in a car, and I'm tempted by the electric scooters down at Soundspeed in Fremont...on and on we walk, better steps forward!

Hi Harold Thanks for reading the blog
Yes, we can all just keep on making small steps. But of course bigger steps are even better, like the legislation that will outlaw plastic bags.