Our Flesh of Flames Theodore A. Harris captions by Amiri Baraka 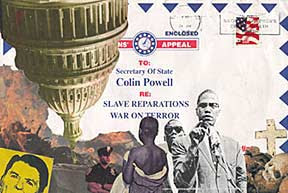 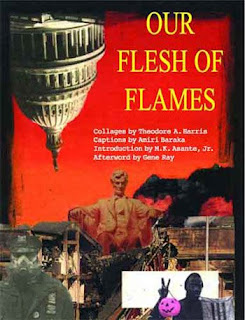 Our Flesh of Flames is a must buy, must read, must get on it book. You can buy this book from Anvil Arts Press
The collages are full of specific references to racism, and the corruptions of capitalism. Harris has drawn on events that we all know about, and presented them in a way that tells us just where they came from and where we need to be to change things.
He doesn't pull any punches on what is wrong
Vetoed Dreams 1995 has an upside down capitol dome and a young black boy with a gag on his mouth. It is simple and clear what he is saying. Young black men have no opportunity to be part of the American "land of the free." Black people are not surprised by Abu Ghraib. It is no different than what has been going on in the US for hundreds of years, in prisons, in slavery, in Jim Crow, in the Klan, and not just in the South by any means.
Eric Smith
is the first named person with a collage in the book. I have a link to his story, which is a horrifying, but all to familiar story of police brutality, ignorance, prejudice. Eric Smith was deaf and when he tried to communicate by signing, he was beaten to death. The collage has a picture of Wanda Hogue his mother holding a sign, Remember Eric smith, Stop Police Brutality. In the background is a travelers check from the Bank of America with a smug portrait of a white banker and an upside capitol building. The system killed Eric Smith.
We Wear Our Flesh like Flames 1999, the title work of the book, has a fire in the background and two African women in the foreground carrying large containers on their heads. The flames are the city burning.
Betrayal
Makes a reference to cotton pickers in the foreground and has a reproduction of Leonardo's Last Supper, with a haloed Christ at the center. The distance from Christian love and the oppression of impoverished cotton workers is vast.
Meditations for Betty Shabazz, 1998
Shabazz was Malcolm X's widow. The complex image has a grieving Shabazz in the foreground, with references to Mumia abu Jamail's unfair imprisonment, a piece of a statue of liberty and other details. The intersection of crucifixion and the American Express is again included.
So the themes are the sham of the American myths of freedom and opportunity in the face of the slaughter of black people. There are also homages to poets like Sonia sanchez and Lamont B. Stptoe, Poets against the War, and perhaps most poignent, the Long Dream, the face of a young black man behind bars behind a wall of concrete that is splitting up.
Posted by Susan Platt at 2:40 PM

Email ThisBlogThis!Share to TwitterShare to FacebookShare to Pinterest
Labels: Our Flesh of Flames Theodore A. Harris

The book may be purchased from the publisher at:
http://www.anvilartspress.cjb.net/
Stephen Paulmier for Anvil Arts Press