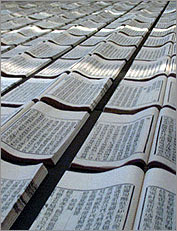 On a positive note, Seattle has an extraordinary exhibition of contemporary Chinese art at the Asian Art Musuem until December 2
Originally curated by Wu Hung at the University of Chicago for the China Institute Gallery it was supplemented in Seattle, due to the efforts of the assistant curator of Chinese art, Josh Yiu. Yiu was able to add to the original exhibition with Xu Bing's famous and still stunning Book from the Sky, borrowed directly from the artist.


The exhibition is an opportunity to see a full range of well known Chinese artists
in some cases with little known works.

Cai Guo-Qiang for example is represented by a piece about Japanese pirates in the Middle Ages which he never realized for political reasons. Professor Gu Xiong, now residing in Vancouver, shows his notebooks from his years of re education during the Cultural Revolution in which he made detailed sketches of his life and that of the peasants from whom he learned how to do backbreaking work for three years.
There is an amazing piece by Song Dong, A room full of Calligraphy Model Books, 1995, 158 books all shredded and lifted up by an electric fan. They seem to be dancing on their spines as they reach helplessly out of their bindings.Unreadable and unusable, they nevertheless speak about the poetry of the book and calligraphy in China.

But the Book from the Sky is still the tour de force of all works from China about the book. Everyone knows the story, that the artist invented 4000 characters that cannot be sounded or read. It is piece that sings with beauty and complexity of meaning. Beautifully installed in a self contained gallery, It hangs over our heads like a sweeping sail of a new type of ship. It fills the gallery floor with a sea of books, it covers the wall with panels of text that are like windows to a world we cannot penetrate. The photograph here is a detail from an installation in Albany.

The unreadable books created in the late 1980s are subversive on so many levels, for an artist who grew up during the Cultural Revolution.

For all of these artists, the book was destroyed in its traditional meaning, literally, as they were asked to burn libraries as young red guards and commit other acts of descrecation against what was labelled as "capitalist" culture and decadent aesthetics. They themselves were forced to read only the Little Red Book. Yet calligraphy survived. Mao was a calligrapher and a poet himself. So in spite of the destruction, the book is a sacred tradition in China still, and that reverence can also be felt in the exhibition. Finally, the transformation of the book physically, and the departure from the ideology of the Little Red Book, as capitalism has taken hold in China, also permeates the work in their scale, media, themes, and presentation.
Posted by Susan Platt at 1:12 PM No comments: 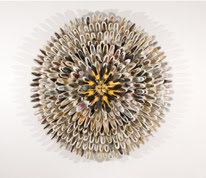 Unfortunately at the Frye Art Museum they paired Cole in a conversation with a curator of African Art and tried to pigeon hole him in that one box. They basically primitivized him, rather than honoring him for the extraodinary artist he is. They further belabored the African theme with films on African art during his exhibition
His conversation was at the same time as a Friday night open house and held in a gallery, so it was impossible to hear. But when a food critic, who had top billing at 8PM came on, everyone was asked to be quiet. Let's see how many other ways can Seattle demonstrate its oblivious racism?
Posted by Susan Platt at 12:59 PM No comments: