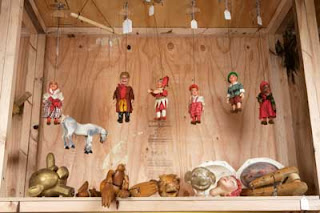 At the recommendation of a friend of mine, I went to see the Puppet Show at the Frye Art Museum. It came from the ICA in Philadelphia and co curated by the Vera List Center for Art and Politics at the New School. So naturally I expected something political. As usual when looking for politics in mainstream interpretations, I was deeply disappointed.
What an odd show, and an odd interpretation of the importance of puppets. The show had an historical segment, with no labels and no explanation at least in the Frye showing. I think maybe there are some labels in this picture from the ICA
Then it had a big room of hot contemporary artists that we are familiar with, lots of videos and sculpture.
The explanation for the broad inclusion of big name artists was that they "evoke topics associated with puppetry such as manipulation, miniaturization and control" OK, so you see where this is going. First we have a lack of historical information, then we have a focus on technique, rather than topic. Then the next sentence of the gallery blurb said "Perhaps it is the puppet's power as an allegorical object that makes it so relevant and liberating.In a time when communication seems increasingly mediated and individual agency diminished, puppets abstract the drama, mysteries, anxieties and personas we might all project onto a shared stage."

The key word here is "abstract". That is of course not the point of puppets at all. It is perhaps the point of the contemporary art by Louise Bourgeois, Annette Messager, and other contemporary sculptures, but puppets are about politics, about speaking truth to power, about saying exactly what you think. They are not about miniaturization, but about creating a parallel universe that is very political. It can also be mythical, romantic, and historical, aesthetic, and really, really funny.
They also tell stories. Fun stories with second dark meanings. But none of those basic ideas are present in either the show or the gallery discussion.

In spite of all efforts to obfuscate and play the abstract card, there was some great work by William Kentridge including his seminal collaboration with The Handspring Puppet Company from 1994 in Johannesburg called"Ubu and the Truth Commission." It was about the Truth and Reconcialition Commission. This was worth sitting through entirely.
The Survival Ressearch Laboratories also had an odd early piece of robots and lots of conflagration from the summer following the World Trade Center attacks. It seemed like a statement about contemporary society to me, but a little too Terminator and Hollywood.
There were some other videos like Kara Walker's that I have seen before, with the usual Walker issue. Does it perpetuate racist stereotypes, or offer horrifying revelations of sexual assualt during slavery. An article in recent analysis I have read suggested that Walker needed to see a therapist.
And of course the main idea of a puppet being manipulated by some higher power is always something to think about, except for us activists, who want to get people moving, not have the idea that we are all pawns in a bigger picture where we are not holding the strings.
But puppets are really political, they are not games, they are not really passive. We pick up the controls ourselves, it is a populist art of resistance. That was missing of course.
Where was Bread and Puppet Theater for example.
What about puppet traditions like Karagoz that include both Turkey and Greece and which is full of ancient stories with modern resonance.
What about Indonesia where puppets are a central art form.
What about actually engaging with the history of puppets, rather than contemporary artists with name ID who really have nothing to do with it, or who do feeble spin offs from Sesame street(Christian Jankowski) that are more aggravating than important..
Posted by Susan Platt at 3:54 PM 2 comments: 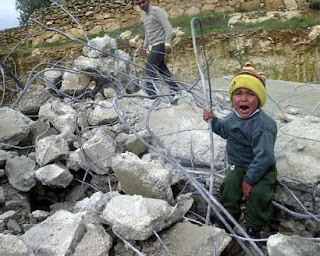 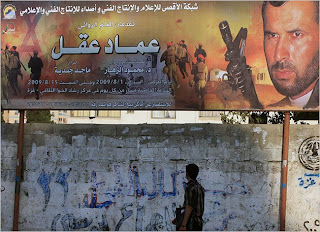 Everything makes a difference.
Posted by Susan Platt at 12:04 PM No comments: