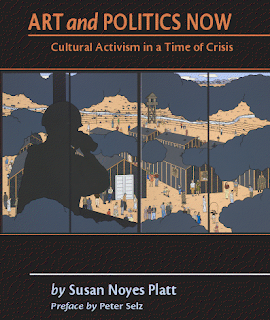 This was the big week. Seventy people at the launch at Elliott Bay Books in Seattle. The book is now available from Midmarch Arts Press, 300 Riverside Drive, New York City. 1 212 865 5509. This will be my last post at this address. Please buy from my loyal independent publisher!! It is not on Amazon!! A stamp and an envelope is not too much to manage.
Today, I am moving my blog to
http://www.artandpoliticsnow.com/
You will see my homepage and the blog link. My blogs will also be posting to my Facebook as well.
See you there.
Susan
Posted by Susan Platt at 11:29 AM No comments: 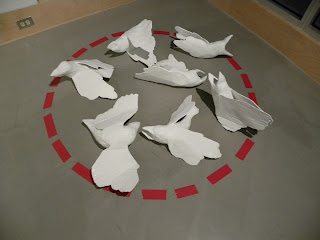 Lara Evans, art historian and artist, as well as Evergreen State College professor, has published with other authors a new book called Art in Our Lives, Native Women Artists in Dialog. She has also curated a wonderful art exhibition It's Complicated - Art About Home.
The two together give us new perspectives on contemporary native art.  It is really exciting to have voices of a new generation. In the book, there are actually several generations, but the discussion  is based on a novel format, a seminar among the artists.
The essays are overviews of various themes, Art as Healing, Art as Struggle by Gloria J. Emerson, Gender Women and Art Making by Sherry Farrell Racette, Space Memory, Landscape Women in Native Art History by Elysia Poon, and  Crossing the Boundaries of Home and Art. by Lara Evans. The dialogue among these artist and others as the basis for the book. It is both personal and historical, spanning generations, and practices.

It is a wonderful addition to writing on Contemporary Native American Women Artists. The essay by Sherry Farrell Racette was particularly provocative in its references to the history of tribal gender roles. I was a little surprised though that unmentioned was what I understood as a fact ( perhaps it is not) that settlers declared they had to deal with a male chief in negotiations with tribes that had been matriarchal, and that caused a major shift in the gender power relations in many tribes. Also, in the Northeast, it was the rights of Native women that inspired the suffragette movement to demand more rights for white women.

But certainly, gender roles vary from tribe to tribe and era to era. Also the value associated to various activities have been arbitrarily assigned perhaps by outsiders. Why is it necessarily less significant to cure and cook fish than to catch them? Why is bead work or basketry less significant than sand painting?

The fact is clearly stated that for these women, they had to move outside expectations and norms in order to be artists. And it is evident that their work is incredibly varied, intriguing, and complex, based on the magnificent color illustrations in the book (according to American Indian magazine, the pubication of the National Museum of the American Indian, the museum provided significant funding).

The work at the top of the post  is from the art exhibition. It is by Maria Hupfield, Flap Flap Flap 2004 plaster and paper mache. Hupfield is addressing ecological crisis with her dead birds, but their are so beautifully laid out on the floor of the gallery that it is possible to almost forget the actual subject. That edge of aesthetics and politics is crucial to this entire exhibition.

The artists are addressing intersections of native world views and mainstream. For example in one piece by Merritt Johnson, the animals are patching the Sky Dome, They are giving up their lives in order to keep the world going, A bear stands on top of a ladder offering  his skin. We on the other hand just go on with our same bad habits. In another work by Johnson, an  injured Turkey is protecting the sky. In a third she makes a reference to the BP oil spill 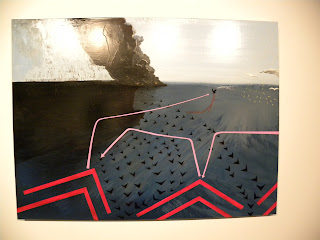 One of the themes of the art exhibition and the book is the changing relationship to the land for contemporary Native artists. But in spite of that the urban/reservation split is not absolute in any of these artists. They all move back and forth, between different realities, as does their art. That is the reason for the title of the exhibition "It's complicated, Art About Home. 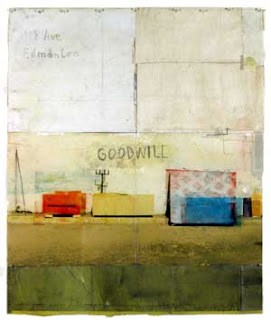 Perhaps the most compelling work in the exhibiton was by Kimowan Metchewais.
Goodwill 118 Edmonton, it is an innocuous image of the place where people drop off furniture for Good Will, but as Lara explained it, many native peoeple furnish their homes from this drop off. In addtion, this detailed and extraordinarly beautiful painting was done by an artist who lost the use of one whole side of his body.There are other works, videos, youtubes of Phoenix Arizona ( other peoples' idea of home), a creation myth, a stunning pair of photographs by Sarah Sense.with an overlay of woven photographic imagery based on traditional weaving from the Chitimacha tribe who have a long tradition of basketry.
There are podcasts about the exhibition at this site.
Each of these artists both in the book and in the exhibition was previously unknown to me. How enriching to have this opportunity to expand my knowledge. Be sure to buy the book!
Posted by Susan Platt at 8:50 PM No comments: