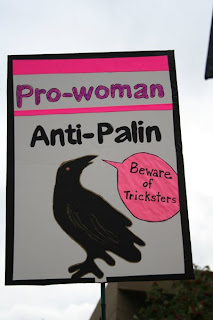 Well I have to say something brief about Sarah Palin. The best email I got described her as a post turtle.
"While suturing a cut on the hand of a 75 year old Idaho rancher, whose
hand was caught in a gate while working cattle, the doctor struck up a
conversation with the old man. Eventually the topic got around to Sarah Palin and her bid to be our Vice President. The old rancher said, 'Well, ya know, Palin is a 'post turtle".
Not being familiar with the term, the doctor asked him what a 'post
turtle' was. The old rancher said, 'When you're driving down a country
road and you come across a fence post with a turtle balanced on top,
that's a 'post turtle'.'
The old rancher saw a puzzled look on the doctor's face, so he continued
to explain. 'You know she didn't get up there by herself, she doesn't
belong up there, she doesn't know what to do while she is up there, and you
just wonder what kind of a dumb ass put her up there."
Posted by Susan Platt at 4:44 PM No comments:

I just found a new book by Boris Groys. His arguments are strangely out of date, although this is a new book from 2008.
"If we want to speak about the ability of art to resist external pressure, the question must first be asked Does art have its own territory that is worthy of defending?
The autonomy of art has been denied in many recent art theoretical discussions. If these discourses are right art cannot be a source of any resistance whatsoever. Dos art hold any power of its own or is it only able to decorate external powers? Yes art does have an autonomous power of resistance. "
Groys from "The Logic of Equal Aesthetic Rights" in Art Power
What is wrong with this argument?

First, he is defining "resistance" as "resistance to external pressures". Well, of course he is shaped by his own background in the Soviet Union as the champion of the dissident art movements.
In that context, resistance was to external pressures to be doctrinaire and follow a party line. His concept of the "autonomus power of resistance" is an oxymoron, resistance cannot be autonomous. What I think he meant was the power of art to defend its autonomy, which of course is a meaningless modernist dead end.

But in the US in 2008 resistance in art is resistance to capitalism in all its manifestations in the art world, and outside of it.
The artist today who can use "the power of art" to speak to the problems in the world, like those artists of the 1930s, is the resistance artist. Why should resistance be focused on defending the autonomy of art? What a waste of time!

Context is everything.
I have noticed that among other critics bred under Communism that they often read political art as only that which is dictated by an oppressive central authority, and therefore political art is always bad. They often tout abstraction as a sign of freedom. Indeed abstraction can be a political act in certain environments. At the same time, critics from formerly communist countries like Marius Babias have a far more complex reading of the relationship of art and politics than the typical US critic who is hampered still by the Greenberg legacy. Amazing how enduring that is.
Today, the art world still loves abstraction as a marketable product. Art critics ( and artists)can still thoughtlessly dismiss political art as "preaching" or whatever.

see www.artofdemocracy.org, a nation wide group of exhibitions and artists who are creating art that speaks to what is happening now. And that is just the beginning. There are several shows in New York including Martha Rosler's new work that continue the tradition of engaged art.
Posted by Susan Platt at 4:44 PM No comments: 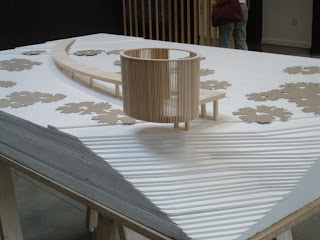 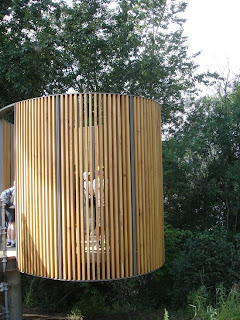 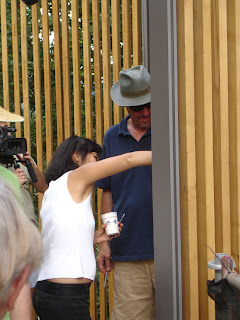 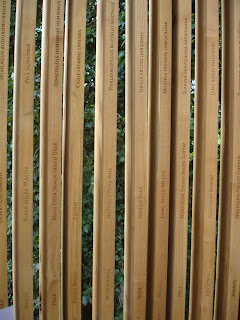 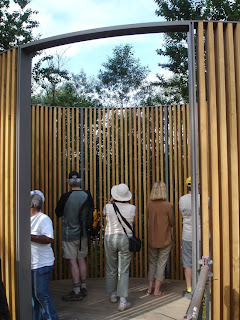 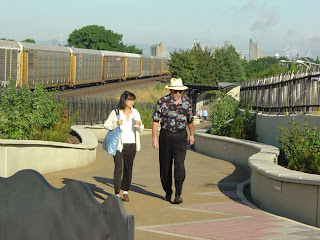 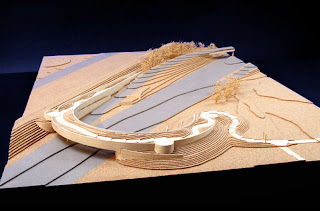 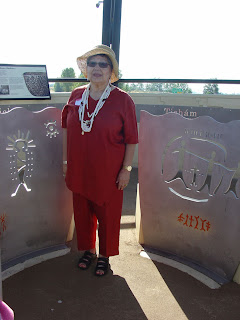 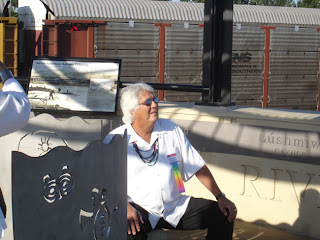 This is Maya Lin walking up Land Bridge from the Columbia River to Fort Vancouver.
Also shown is a model to give you the full effect of this bold concept, the artist Lillian Pitt and the architect John Paul Jones.


Confluence Project is the largest work of Land Art ever created. It extends 450 miles along the Columbia River and includes seven different sites. The initial impulse was part of the commemoration of Lewis and Clark's journey in 1804, but it is a commemoration of loss, a celebration of rebirth, a restoration of the land, and as the new brochure declares " (it is)places reclaimed, transformed, re-imagined."

Maya Lin and the Confluence Project are collaborating with many different people in order to make these sites happen, but particularly with Native Americans .
They invited her to be a part of the project after seeing the film on her Vietnam Memorial. They felt that she could commemorate the loss of their cultures since Lewis and Clark.

But the project also marks the loss of birds, and other species, as well as plants and flowers by recording Lewis and Clark's journals and making reference to their current status. ( see Bird Blind entry next)

The first site dedicated was Cape Disappointment at the Confluence of the Columbia River and the Pacific Ocean. I have written about it in Sculpture magazine, along with an exhibition at the Henry Art Gallery at the University of Washington in Seattle of Maya Lin's sculpture.

Last weekend the Land Bridge was dedicated. John Paul Jones who also completed the National Museum of the American Indian in Washington DC was responsible for making it into a reality, starting from an extraordinary concept, developed with Maya Lin, of an implied circular form.

The site of the Land Bridge is on Fort Vancouver, a military site established in 1848 when the US basically made the Hudson Bay Company leave. The Hudson Bay Company had established itself on this site on the shores of the Columbia River in 1824, twenty years after Lewis and Clark passed by. The site had already been cleared with controlled burning by native tribes in order to grow plants like Camas that they used in their daily lives for eating, making baskets, medicine and many other purposes. It was a place where inland tribes came down to the river to trade with the river Indians. It was called the "place of the turtle". The connection between the inland and the river has now been reestablished with the Land Bridge. 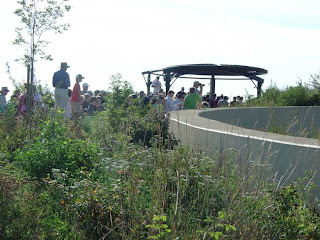 It is called Land Bridge because it includes native grasses and plants. John Paul Jones called it "pulling the prairie over the road", and indeed that is what it does. It spans a wide highway, then drops down to an historic apple orchard with the first apple tree planted in Washington State in 1825. Then there is an underpass under the railroad and you arrive at the river.
The Bridge is a beautiful sweep that meanders like the original Indian Trail, even as it suggests part of an implied circle. Maya Lin and John Paul Jones collaborated on the original concept when the whole project seemed almost impossible.
The bridge is marked by a Welcoming Gate made of cedar and basalt 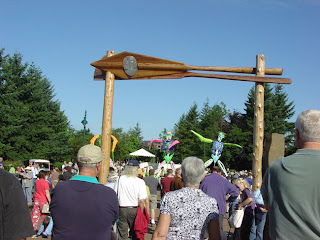 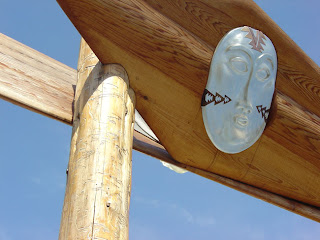 with a glass sculpture that captures the light and makes reference to the role of women in the Columbia River cultures. Three seating areas are marked, "land" "water" "people", with Indian words for those concepts cut into the vista point. Lillian Pitt who is photographed above near her seating "baskets" created benches with stainless steel backs that have designs evoking petroglyps and pictographs from the Columbia River.