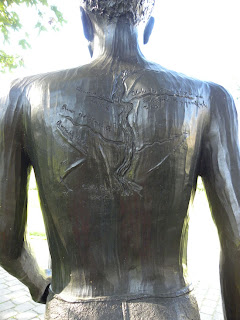 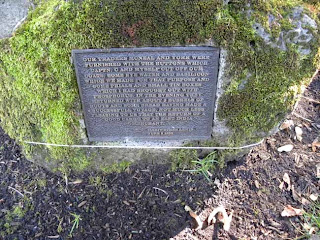 This is the work of Alison Saar in the exhibition Bound for Glory at Lewis and Clark College in Portland. The main commission was to create a statue of York, the African American slave that accompanied William Clark on the Lewis and Clark expedition. Saar's sculpture is a permanent installation on the campus. Here is the main work and the back. Little is known about York. So the artist had to piece together ideas, but we know that a dry stream was named for him. His back as a map of scars with the dry stream marked is full of poignency. York is set in the midst of a group of granite rocks, each with a bronze tablet that inscribes the few words in the Expedition journals that refer to him.

York faithfully served Captain Clark, but he was not rewarded with his freedom. Clark was arrogant and selfish. In the statue York is holding a rifle, which he used to catch game during the expedition, but when they got home it was taken away from him.
This tragic story of inequality and abuse of priviledge is given dignity by Saar's sculpture.

The work in the exhibition was extraordinay. An excellent catalog with an essay by Linda Tesner (doesn't seem to be available to buy, they gave it out free at the gallery and would probably send you one if you asked) provides helpful insights into the art works, but these works are so strong and poignent that we cannot help but be overwhelmed by Saar's work. I think she is acheiving a whole new level of intensity in these sculptures. 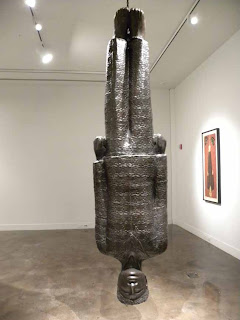 There was one odd comment made by Tesner with reference to Travelin'Light, a bronze life size man in a suit hanging upside down. To me he was obviously being lynched, but Tesner said, he was "a little down on his luck." I read this three times to see if I had missed something!
But the rest of the book was very insightful. Lunarseas, Sea of Serenity (above) is  "speaks to introspection about how things come to mind in a quiet way, but also suggest thjat within the removed quietude of serenity one might verge on insanity ..." Blood/Sweat/Tears at the top of the blog is self explanatory. There were many other really strong works as well.
Posted by Susan Platt at 4:15 PM No comments:

Imaging Others Cultural Intersections in the Colonial Period 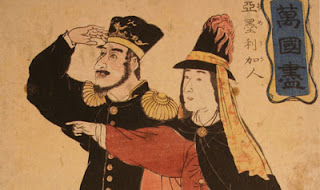 Look at this wonderful image! It is a detail of a print by the Japanese artist, Yoshitora in 1860 looking at an American couple who are visiting Japan, probably in order to trade. The artist is carefully depicting their clothes. He has done a wonderful job of observing  details and added his own subtle touch, like the woman in the foreground pointing, a very un Japanese gesture.

This is part of a a group of ukioy-e prints, called Yokohama-e because they are all based on observation of foreigners in Yokohama by Japanese artists. The work is from the collection of Professor Lenore Metrick-Chen, art history professor at Drake University. It is part of a fascinating exhibition that she has organized with Dr. John Monroe, a history professor at Iowa State University.
"Imaging Others, Cultural Intersections in the Colonial Period" is  at the Anderson Gallery, Drake University, 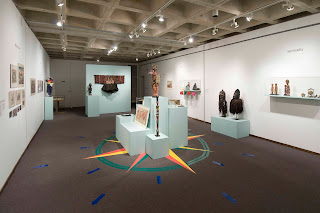 It includes art work from Africa, China, and Japan, as well as photographs made in the U.S. in the late nineteenth century of "others".

The very first piece in the gallery was an African sculpture of a person with a painted white face and anglo features. It set the tone for  the surprises of the exhibition, that criss cross cultural influences to the point where all clear distinctions of gender, place, style, and power, are called into question as we look at the work.

Some of the images are familiar subjects, like Chinese railroad workers in America, and the Columbian Exposition of 1892. But then we see two men who were posing in an African display relaxing as they are not being African symbols, but just taking a break and relaxing, and of course they are just regular people.

The works span from 19c to the present. Two of my favorites were the carvings of African Missionaries, who were incredible stiff and straight looking, not a sensuous curve to be seen anywhere. 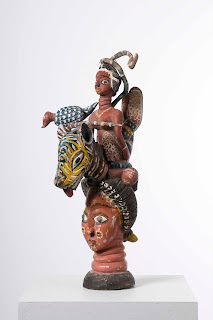 It is a stark contrast to this figure of Mami Wata, a fabulous carving based on a religion of the late nineteenth century in the collection of John Monroe, history professor at Iowa State University. The image started from a German lithograph of a circus snake charmer and was transformed into a powerful religious figure in Nigeria who went in for exotic foreign accouterments.Mami Wata worship has spread all over Africa and the African diaspora..

In the US we always look out, and assume we are the dominating culture of the world, that what we have to offer is superior and desirable to everyone else. . But in fact what we send out is alien, perhaps unwanted, and corrosive. But the cultures that we visit ourselves on send back our intrusions through cultural acts that transform our ideas with  irony, humor, and a sense of our foibles that we ourselves do not recognize..

This exhibition is entirely refreshing, and its catalog, written in collaboration with students' questions about colonialism,  is a great format: .
Near the end,  Dr. John Monroe comments :
"If we just reject racist images from the past without trying to work out what social, imaginative or cultural functions they were supposed to serve - which involves placing them in a broader context- we end up with less of an understanding of how and why racism emerges. It's never something that pops up in isolation: it always exists as part of a complicated web of attitudes and assumptions that need to be untangled. That of course goes for the present as well as the past."
Posted by Susan Platt at 9:39 AM No comments: