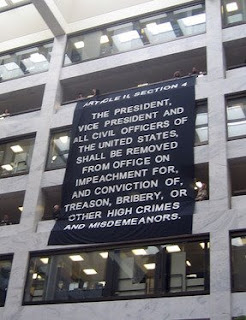 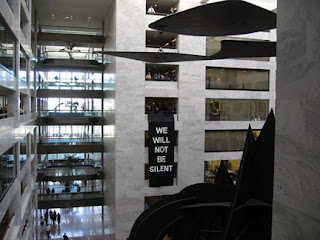 Artists against the War, New York City in collaboration with other groups, handed out a petition for impeachment and supporting documents. It was designed as a tabloid newspaper and delivered to every congressional office.
This is a brilliant direct action in the halls of power as Congress is wimpering and whining and unable to really take a stand, except with a feeble bill that they basically invited Bush to veto.
AAWNYC/ART (Activist Response Team) also did a stunning banner drop with the section of the contitution about impeachment in the atrium of the Hart Senate Office Building .
They are potent artist activists. Images of their actions are available through their website http://www.aawnyc.org
The sophistication of the visual images designed by artists makes a huge difference in their effectiveness. It also demonstrates their courage and determination to great rid of this President who is ruining Iraq and our own country as well. The soomer artists join the activist camp, the better, we cannot afford the luxury to follow our own private paths anymore.
WASHINGTON, D.C.FOR IMMEDIATE RELEASE:HIGH CRIMES AND MISDEMEANORS - WE WILL NOT BE SILENT
TODAY, APRIL 26, 2007, A.R.T.* OCCUPIED THE HALLS OF CONGRESS IN A DRAMATIC TWO-PART ACTION.
Multiple actions occurred in the early afternoon today inside the Hart Senate Office Building. Eight New York activists were among the 15 plus arrested.
First, in a massive distribution, A.R.T. hand-delivered a 20-page tabloid petition to every representative. It contained documentary evidence for indictments, literally putting impeachment back on the table.
Then, at 1PM, in a spectacular visual feat, A.R.T displayed the full text of Article II, Section 4 to the Senate as a 30-foot banner drop in the Hart Office Building atrium.
A second 30-foot banner read "YOUR SILENCE YOUR LEGACY". Organizers said, "We must magnify the refusal of Congress to uphold the Constitution. Their silence equals complicity in the flagrant crimes of this administration."Contact: *A.R.T. (Activist Response Team)email: stateofemergencyaction@gmail.com
Posted by Susan Platt at 1:04 PM