James W. Washington, Jr. Creativity as a path to freedom 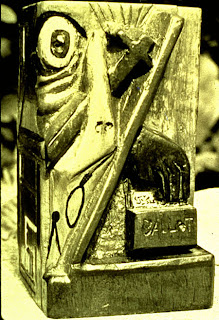 This sculpture by James W. Washington, Jr, The Chaotic Half, was made in 1945, long before the so-called era of Civil Rights in the 1960s. I say so called because African- Americans had been fighting for their Civil Rights ever since they arrived on Slave ships.

Washington made this sculpture one year after he moved from the South to the to the Northwest (through Civil Service Employment). He wanted to speak in his art to the injustice that he had experienced in the South. He found a lot of racism in Seattle as well, but he felt freer to express his real feelings in his art. He only did three art works directly calling attention to racism, all in the 1940s.

On the right a hand puts a ballot in a box. Behind a diagonal line which serves as a partition is a KKK hood, a noose, a cross and an "all seeing eye". The eye is the eye of surveillance, suggesting the constant vigilance that Washington had to practice growing up when, as he declared "he lived in fear most of the time."

Growing up in Mississippi, Washington experienced the preachings of organized religion as part of the oppression that affected his spirit as much as the KKK threatened him physically.

He celebrated creativity as a means of freedom in all of his art work. When we think of the cuts in support for art programs in the schools and in our nation as a whole, we know that the freedom he spoke of, the creativity that he celebrated, is a revolutionary idea. He believed each person could find their own talent and make it work for them.

It is a radical idea even today. If culture can be liberated from materialism, ambition, elitism, academia, and its other prisons, it can speak of escape from oppression.

That is what Washington did in all his art work even after he turned to more symbolic work and away from explicit images of oppression.
And he succeeded. By the end of his life he was a celebrated artist.
Posted by Susan Platt at 3:53 PM