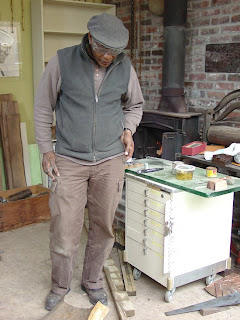 Daniel Minter Artist in Residence, James Washington House, Seattle Wa
Daniel Minter is seen here working in the studio of James W. Washington, Jr. . Mr Washington died in the year 2000, and it was his dream that his home and studio could be a facility for creative collaborations. Daniel Minter was the first artist to take part in a residency at the house ( which includes a place to live for the artist). He collaborated with Washington by using stones left behind that Washington had selected for sculpture but never used, creating an assemblage with Washington's used chisels, and re using a hollow tree trunk that Washington had chiseled out, but never developed. Minter's work includes references to the African American life in America on many different levels,
Minter grew up in South Georgia in a small town, but he always knew he wanted to be an artist. As a child he drew in in the dirt. Later he went to art school. His work is an homage to the extraordinary people, spirituality, histories, and experiences that he experienced both growing up and since then. 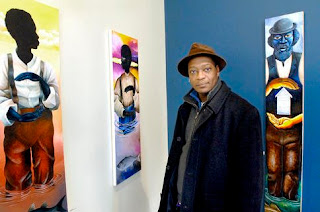 His most recent series currently on view at the Northwest African American Museum, Seattle, is a series of evocative portraits of the people of Malaga Island off the coast of Maine. In the early twentieth century this diverse community was forces to leave the island, many of them were sent to an insane asylum in order to make way for development. Minter found descriptions in the papers of the time of the people as a "subhuman eye sore".
The works he created in the residency at the James Washington House are also an homage to Washington himself, who, according to Minter, "represents everything that I am attempting to do and he did it alone. There were a lot of James Washington Jrs. who were not able to do that, there was no path open for them. He made his own way through stone. I am very honored with Washington's gift of his opening the way for me. " ( lecture Seattle March 25, 2008)
Here are some of the pieces that he created in collaboration with the spirit of James Washington. 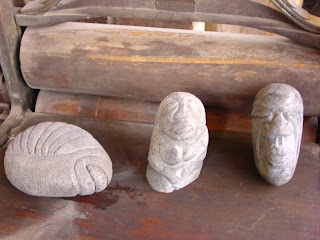