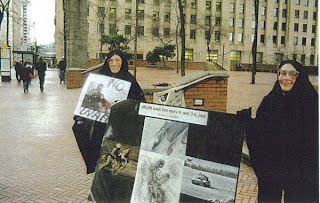 I have been unable to write on my blog for almost a month because my dear friend and wonderful artist died on April 16. Selma is on the right at this anti Iraq war demonstration in Seattle from 2004. It tells us that she was an artist and an activist, she lived what she believed in as well as leaving behind a magnificent body of drawings. As Larry Gossett from the King County Council, said in his tribute, she didn't just contribute art or donate her time, she was part of the political activism, she put her body on the line.

Her drawings are in the grand manner of old masters ( among her posters of Kollwitz, Goya, Beckmann, was also one with a drawing by Boucher and paintings by Rembrandt. ) Her studio was filled with images of human brutality from the Warsaw Ghetto to the Iraq war, South Africa, India, Afghanistan. She took the message of the holocaust and translated into a life long commitment to fight injustice and inhumanity. But her house was filled with the joy in humanity, children, workers, animals ( tiny carved figures on every bookcase), and the poetry of the everyday object over and over. Because her eyes were acutely responsive to aesthetics and beauty, she felt the bestiality of the world all the more deeply.

Everything in her house was filled with content as well as arranged with an aesthetic flair. For example, the numerous CDs that we receive offering free internet services were arranged in compositions matching their colors, a put down to capitalism and a recycling that also transformed an annoying plastic object into an aesthetic experience.

Her art was also transformative. She used only chalks and charcoals, the most fragile materials as she said, as fragile as human life, as easily broken, and she created works of art that contained both the violence and the alternatives to violence in one stroke of her arm. She could draw highly realistically or completely abstractly. She frequently incorporated text, both in the work itself or beside it, showing her sources in photographs and texts. This served to both document the incredible scenes, and to highlight her transformation of her sources. She drew often on hundreds of images in order to extract the meaning of an act. These drawings contain within them her thinking, her seeing, her feelings, her hopes as well as the reality of the condition of the world.


She herself grew up in Kingsville Texas, the only Jewish family in a company town owned by the King Ranch. She learned about discrimination early in her life. Her social activism began first in Austin in the 1950s, then was catalyzed by seeing a movie in Berlin while on a Fulbright of Hitler's Mein Kampf. When she saw the pictures of the Sharpesville Massacre her course was set for life, not to promote herself within art structures, but to dedicate herself and her art to supporting active resistance to injustice. She was involved with Civil Rights and Anti Apartheid movements in Seattle, she was a pioneer in supporting a Middle East Peace with Israel and Palestine working together, she worked against genocide, the brutalities of soldiers driven to commit atrocities( Her series Naked/Aggression). And finally even as her show was on display of the Bosnian abuses, the Abu Ghraib images came out, and she spent her last five years making hundreds of images on small black sheets of paper, The Black Book of Aggressors.
I will add images to this later today.

Yesterday we had a memorial for her that was magnificent. We started at 5:30 and finished at 8:30 with the tributes, and we were all as brief as possible ( 30 people contributed) . We heard poetry, music, dance, prose, letters, and of course, there was an overview of her art. There was also an installation of her art, a virtual retrospective of her career and political posters. It was an amazing celebration with people speaking of her activism, her art, her political commitments to peace int he Middle East, her enormous knowledge based on reading thousands of books, all of which were in her home when she died. Her home was an installation work in itself. Images to come.

Selma! You are the finest politically engaged artist I have had the privilege of knowing.

Below is one wall of her studio with photographs of the Warsaw Ghetto and the Iraq war above her last unfinished work, The House Raid, which you see below in a separate image. Next is another room of her studio(house) with the painting Bread, a long theme in her work inspired by Elie Wiesel, surrounded by her sources. She embedded her art in texts, images, and life, from them she drew her extraordinary drawings. 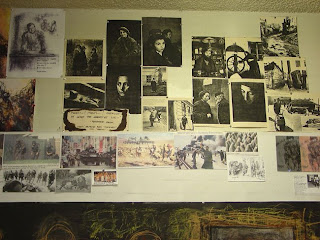 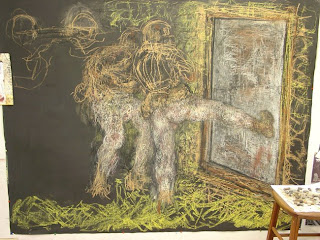 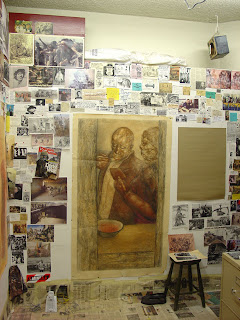