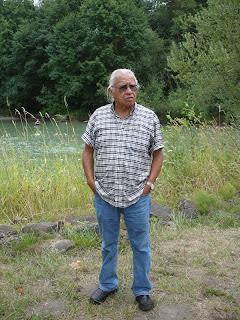 This is Willie Frank at Frank's Landing. Messages from Frank's Landing by Charles Wilkinson tells his story. Willy Frank was first arrested for fishing on his own Nisqually land when he was 14 years old. He led the fight in the Northwest to gain Indian fishing rights. He was arrested many many times but ultimately the tribes were victorious in the Boldt Decision of 1974, which supported the tribes right to fish according to their treaty rights that dated back to the Isaac Stephens Point No Point Treaties of 1855. More than that, the Indians got a fifty percent allocation. The radical decision affected "21 tribes, several hundred tribal fishers and thousands of non Indian commercial fishers, hundres of thousands of sports fishers and dozens of rivers." (Wilkinson 56).

Willie Frank is also an environmentalist. He is profoundly connected to the land and the river and the fish. As Charles Wilkinson puts it " the Indian world view (is)an equality with the natural world, an actual belonging to the same community is in the blood stream of Indian people. "

Today his sons fish on the Nisqually River starting from the Landing that he gained by allotment in 1885. Right up the road are shopping malls and big boxes. On the other side of the river is Fort Lewis Military Reservation which of course also used to be Nisqually land. But Willie Frank has a good relationship with the military ( I hope it endures) and they keep a lot of Fort Lewis undeveloped and allow Indians to gather traditional roots and berries on the land.
He and his family continue to fish. The net fishing they do dates back for centuries. While I was there, his sons and their assistants caught about 100 King Salmon in two hours. The Kings are running right now. Of course times have changed, now they use motor boats and plastic nets, instead of canoes and cotton nets, but the age old tradition of fishing for salmon is still providing the center of their lives and culture

Tobin James Frank refused to sell his fish for Two dollars a pound ( !) Can you believe that someone offered that little. I told the dealer it was 25 dollars a pound at my local grocery store, but he said there were some steps in the middle. I'll say. So I am showing the empty scale that was rejected. Tobin James Frank offered us a fish for 10. but we insisted on paying 20. It was about 8 pounds of fresh salmon. He cleaned it for us and threw the guts back in the river where they belong, as Willie said. We enjoyed it all week and froze half. Yum. 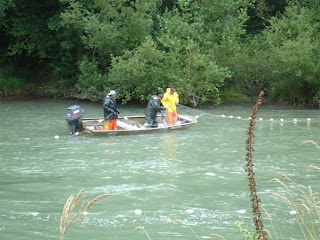 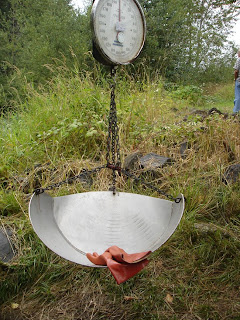 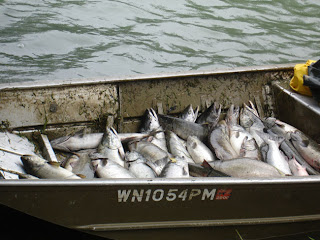