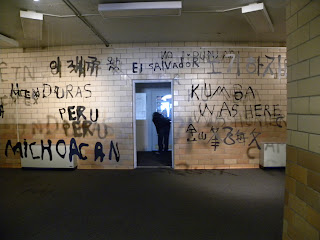 Inscape was an installation of art in a former immigration facility where people were detained until 2003 when a new and much bigger facility opened in Tacoma. Detention is a private industry that is making big bucks. Perhaps you heard the National Public Radio expose that the new Arizona Immigration Law was written by operators of private detention centers and passed word for word, along with corporate and political backing from some major heavyweights.

The artists were attempting to transform the energy in the building. We could all still feel the unhappiness and fear that lurked in these rooms. The building is available for artists studios, and quite a few artists are already working there.

The building was first built during the Alaska Gold Rush as an "assay" office, and the top floor remained that, a place to weigh gold and to establish its value. On that floor of the facility one of the works made a direct reference to that function. Megan Trayner had a piece on the floor with a gold leaf surface. 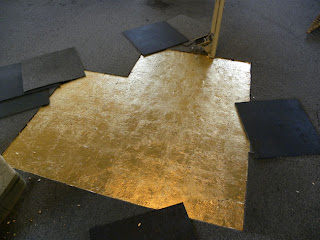 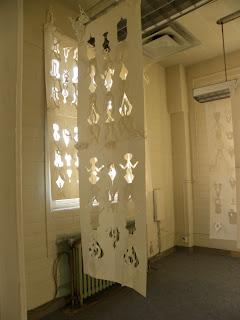 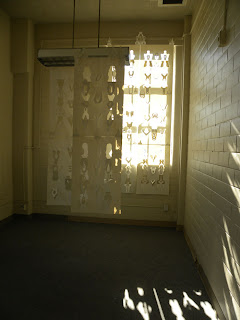 Other artists on this floor included Romson Bustillo whose characteristic abstract patterns with symbolic meanings and intentionally undecipherable titles ( to remind us of how it feels to not undersand a language) filled one end. 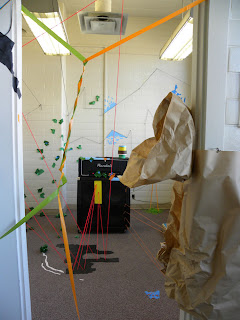 Nic Meisel's serendipitous installation, with its threatening sounds was off in another side room. I saw these pieces as it was getting dark, and the sense of ominousness in Nic's was definately present, in spite of his cheerful presence not too far away.

Some of the work was really inspired by the space and a radical departure for the artist, as seemed to be the case in the work of Katy Krantz ( judging by the art in her studio) who created a wonderful graffitti piece at the front entrance, based on simulating the actual graffitti in the small excersize space upstairs. Detainees from countries all over the world had written their countries on the wall in black tar from the roof. See piece at  top of entry for Katy's artwork based on this graffitti.. 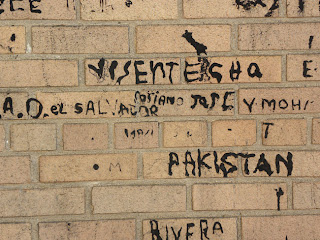 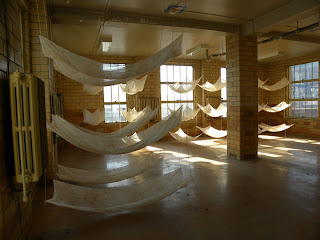 The Chinese Men's dormitory inspired an evocative piece by Helen Gamble. The hanging cot beds suggested both the fragility of existence and over crowding. The races were segregated here, and a high percentage of the inmates were Chinese.

Jen Mills Landscape of Memory, a room full of seats made of salt, suggested instability. 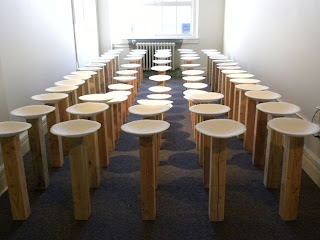 Ju Pong Lin combined video and an ironing board with an installation of shirts that documented the many different ways that Asians had been expelled from cities in the Northwest. 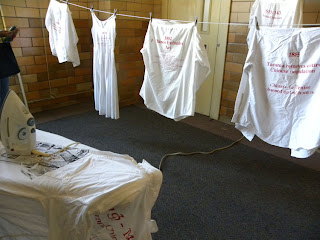 Gail Howard's infirmary of shredded sheets draped over beds captured the idea of illness within prison, not much care, just enough to keep people alive. 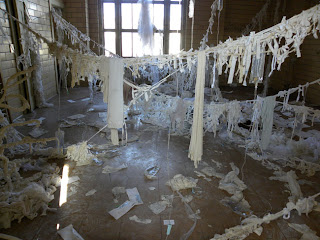 Christian French made a floor game that suggested the labyrinthine bureaucracy and games of chance that people had to navigate in order to get out. 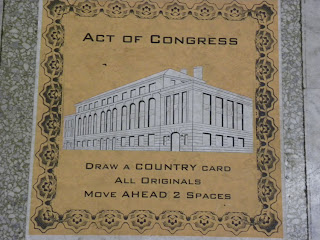 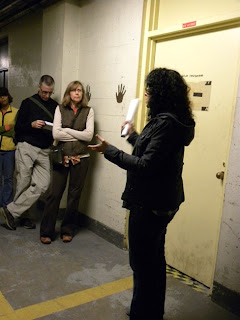 But perhaps most impressive of all was Ladan Yalzadeh's tour of the facility which gave us a complete history and guide to the various rooms and their functions. She had come from Iran in 1986 and been processed through these rooms.


Her personal experience was mild compared to what people experience today, when there is mostly only one way out, deportation, but she clearly described the experience of standing in line day after day, the cramped and crowded rooms, and the atmosphere of oppression and anxiety.
For another artist addressing detention in these very same rooms see my post on Eroyn Franklyn
Posted by Susan Platt at 6:12 PM