Not only possible but also necessary, optimism in the age of global war 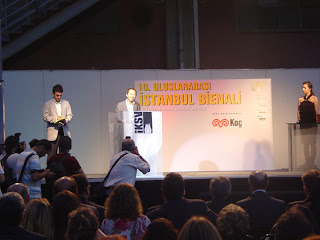 The lengthy title of the 10th Istanbul Biennial suggests Hou Hanru's desire to address the role of art in the midst of the pressing social concerns of the contemporary moment. To a surprising extent he was successful.
There were several reasons for his success.

First, he looked at the modern and contemporary history of Turkey, rather than being seduced by stunning ancient sites such as a Byzantine cistern or the monumental Hagia Sophia, sites which have so often been used as venues in the Istanbul Biennial. Those sites entirely dominate any contemporary art. There was little or no connection between the art and the site.

Second, Hanru selected venues that have a strong resonance with current issues of gentrification, globalization, urban migration, war, social movements, as well as current concerns in Turkey about relationships between the traditions of the secular Republic founded in 1923 and new economic and social realities. Rather than coming as a tourist to Turkey, he read about the modern history of Turkey, the founding of the Republic, and current texts that examine the Republican legacy such as the work by Resat Kasaba and Sibel Bosdogan, Rethinking Modernism and National Identity in Turkey, University of Washington Press, 1997. ( Apologies, there appears to be no way of including Turkish accents in this blog).

Third, he almost entirely eliminated empty art that said nothing. He placed social concerns in a primary position.
Many critics will bemoan the absence of traditional beauty, poetry or aesthetics, but in fact, intense poetry in a new voice emerges in the collective concerns of artists working in various media that communicate clearly through maps, videos, installations, and even diagrams, about the issue they are addressing. These artists are optimists in the sense that they believe that by exposing issues,rather than simply ignoring them, they can make the world a better place. Hanru was not interested in easy superficial viewing, nor in art that would attract buyers. He wanted people to suffer, to think, to experience the city in the different places that were required to go, off the beaten tourist track.

The title "Not only possible, but also necessary, optimism in the age of global war" suggests that art must play a primary role in addressing current concerns. The word "optimism" is the oddity, sitting in the position where you would expect the word "art" , a word which does not appear in the title. In banners throughout the city, the title was changed in Turkish to "Sanat hic bu kadar, iyimser olmamisti. " There has never been so much optimistic art" " So what do we make of that? The slogan makes it sound like all the art is optimistic, when in fact, the opposite is true. Optimism comes from the fact that artists are addressing problems, not simple platitudes of modernism.

It would seem that by avoiding the word "art" Hou Hanru is purposefully saying that art as such, the tradition of aesthetics, is not what is necessary, but rather, a production that presents the current world even as it offers some way forward. Optimism paired with consciousness is necessary. Optimism can come, he perhaps proposes, not from art itself ( that is a tired idea from modernism), but from our collective experience of the artists' ability to address social concerns, their freedom to expose the horrors of war, the divisions of the left, the impact of globalization, as well as their ability to offer alternatives.

More to follow on the art.
Posted by Susan Platt at 10:47 AM