"I have a sense of devastation within me. The works I have deal with devastation. " Rashad Selim

"Art has to do with debris, breaking up, assymetry, loss of grammar. "

The layers of this collage include both old manuscripts which he has torn up and debris. Rashad is echoing the break up of both history and the present in his work.

He speaks of the corruption of language as in the word al Qaida which now means international terrorism, but actually means "fundamental base" in Arabic. It was appropriated by the CIA after 9/11.

"We don't want to lose that last bit of humanity in a state of destitution."

He speaks of the four dimensional war, that includes the destruction of the past, present and future. Depleted uranium is destroying the genetic pool of the future in Iraq.
"There is an absoluteness in this occupation that we have never seen before." 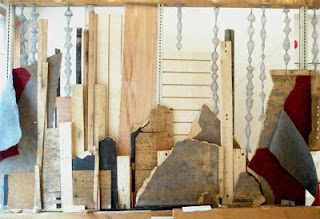 Fragments from the Ministry of Justice, 2007
The large installation was constructed in London as a reference to the devestation in Baghdad. 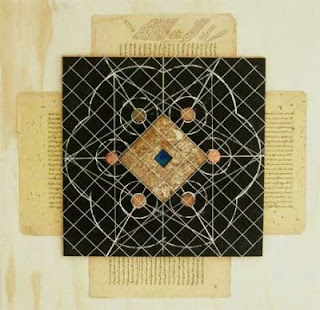 Fragments from the Seven Eyes

Much of his work addresses symbols of unity such as the intersection of the star of David and Islamic pattern, the importance of symbolic numbers such as the six pointed star, seven eyes, and the circle, symbols that come from the Bible, Buddhism, and many other sources. Here also old manuscripts have been incorporated. Rashad is addressing the possibilities of unity, fertility, goodness and well beingn, as a counter to the divisive language of international politics. 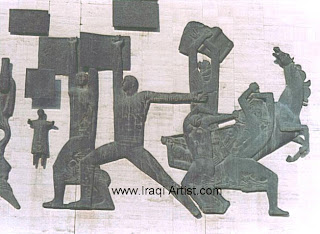 Rashad is the nephew of Jewad Selim who created the Moument of Freedom in 1958. "It is a visual narrative of the 1958 Iraqi revolution told through symbols meant to protray a verse of Arabic poetetry. It is both modern and embedded in Assyrian and Babylonian wall-reliefs."
( Strokes of Genius, 41)
Posted by Susan Platt at 12:41 PM