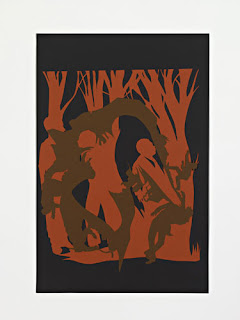 Kara Walker has really started to talk loudly about miscegenation. Although I have seen her works for years, they always seemed to me to be perpetuating racism rather than countering it, but her recent retrospective as well as her new works, on display at Sikkema Jenkins and Co in Chelsea, are unavoidably challenging.

In the newest work Walker links abuse of African-Americans based on research with contemporary examples of torture and abuse in Iraq and Sudan, the message of the abuse of humans is loud and clear. White people actually
can't avoid the past here. It is all so clear that torture is an American way of life.
The work here is part of a series based on research in the "Bureau of Refugees, Freedman and Abandoned Lands - Records, "Miscellaneous Papers," National Archives M809 Roll 23 (anyone can access this source)
The show is called:
"Search for ideas supporting the Black Man as a work of Modern Art/Contemporary Painting; a death without end and an appreciation of the Creative Spirit of Lynch Mobs" .
The title is complicated and ironic. It is worth an essay in itself.

What Walker confronts us with are the horrors of the racist acts of which the US human male is capable based on documentary evidence. There is a direct correlation in the language and actions of today's US human males and females in the war in Iraq and in the starving of millions in Sudan. Our roots in terrorism, both of Blacks and Native Americans, are deep and permanent. Today's world is simply a continuation of that horror.

Title of the Kara Walker work above:

Bureau of Refugees: May 29 Richard Dick's wife beaten with a

club by her employer. Richard remonstrated - in the night was

death by his employer and 2 others.

Courtesy of Sikkema Jenkins and Co.