Art of Democracy and Selma Waldman 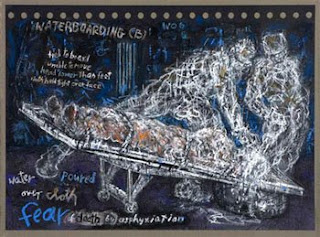 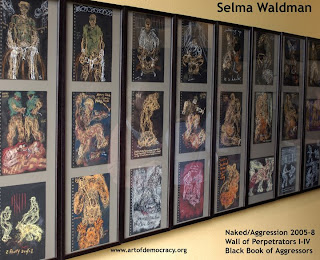 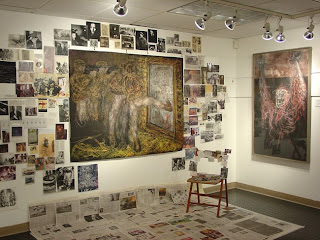 Pornography of Power: The Anti War Art of Selma Waldman is part of a network of exhibitions taking place all over the country under the auspices of Art of Democracy. I will write about them next. Selma Waldman's exhibition, the first since her death in April, is at Seattle Central Community College. It includes an installation that gives a simulation of her studio working environment, her last unfinished work House Raid, surrounded by clippings, quotes, references. It includes the chair from her studio with clippings still attached, her chalks, and a large drawing of Unearthly Grief seen on the right of the photograph.
In addition there is a section on "the struggle for bread" and Soup, three works from her Bosnian War series, and two large Walls of Perpetrators based on Abu Ghraib and Guantanamo abuses.
More detail soon.
I have gained many insights into Selma Waldman's work as I put together this show and went through her surviving archives. Her clippings and quotes combine perpetrators, victims, and celebration of creative resistance. That can include singers, sports performers, Nelson Mandela, MLK march in Seattle, and much more. But the three parts are all important.
Her theme is that the perpetration of violence takes away an individual's humanity, abuser and victim are locked in one energy field, that is like sex, they join together with energy, but in this energy field, they are killing and being killed. Her lines are discontinuous, they do not allow us to relax and enjoy the flow of the body, the fluidity of the human spirit. There are many short tight, taut lines that speak of the violation of the human spirit as it perpetrates violence on helpless people.
Waldman saw that these problems are in every country, there is no difference from one place and another. THe same is true of police brutality as in the Thin Red Line initially inspired by the anti WTO protests in Seattle and the brutal police response, but applying equally to police brutality anywhere, and in fact, the source photograph was from South Korea. 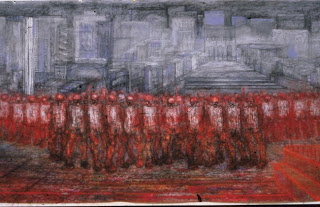 Susan, I see you've been working hard! keep it up. Jim Johnson