Art of Democracy An Amazing Project 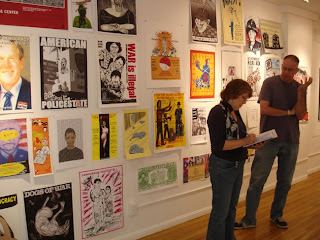 There is so much to write about The Art of Democracy project. In this photo I am talking to Art Hazelwood in the Meridian Gallery in San Francisco. Hazelwood and Steve Fredericks of New York Society of Etchers are the two main organizers of the nation wide project. It includes exhibitions in states across the country, all listed on the great website.

It started with an exhibition in 2006 at the National Arts Club called the Art of Persuasion. Printmakers are part of a tradition of activism in art that goes back centuries. That is because printmaking is a multiple, inexpensive form of art that can be very straightforward at the same time that it is aesthetic. Woodcut, lithography, silkscreen, wood engraving, photo offset, all lend themselves to strong graphic images. They also lend themselves to collective activity. But the media included in these many shows are every possible type of work. In addition, there is a collective exchange of posters ( some of which are seen on the wall behind us), which appears across the country, sometimes as separate shows, sometimes in partnership with other art shows. This collective message is an essential part of the project.

I have visited only a few venues of the Art of Democracy, each one completely different. One venue was a show that I organized of Selma Waldman's work that I spoke about in the previous entry.

On Vashon Island is the exhibition organized by Greg Wessels at the Two Wall Gallery called Up Against the Wall. 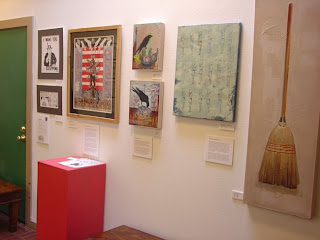 Here is one installation shot. I have put up a lot of images of all the venues on my Flickr site (Art and Politics Now! I am having trouble getting it to come up), because there are too many art works to discuss individually on my blog. But be warned that the Flickr site refused to organize them so just look at all of them on their own. That perhaps is all the better, because the random groupings at venues is really irrelevant to the larger presence of these many strong statements.

The Vashon show was notable because it is in a rustic site on an island full of liberals (typical Northwest artists isolated from each other). Greg Wessels in putting out his call for art addressing the theme of art of democracy gave a lot of people a chance to participate, to voice their ideas, to get together.

In fact one of the big benefits of a project like the Art of Democracy is that it gives artists who care a lot, but have no where to put the art that speaks to issues, a place to show. It stimulates them to create work on the theme, to bring together their art and politics. It supports a connection that the mainstream art world does not really support. For example, we have Betti Bowman who is living a suburban life with kids and brooms. She read a book on torture by Mark Danner called Torture and Truth. She started thinking about ordinary activities she was doing in relation to the horrible revelations. The result is "this is not a broom" ( my title), but an instrument of torture. This is not a child shivering near a pool, but a human being shivering from torture. It is a long way from Bellevue Washington to Abu Ghraib, and Betti Bowman is reaching out and thinking about it.

That is the main thing in my opinion. I am not, as a critic, concerned with comparing her work to other artists addressing torture. I am advocating that artists think about what horrors are being committed and have been committed, and do something about it. Since they are artists, the obvious response is to make art. And a lot of artists are doing just that.

The show on Vashon has a huge range of styles, media and ideas. Betty Gardner from Priest, Idaho brought puppets, a perfect concept for the current world. The collage that she left in the show shows Bush handled by puppet hands of various capitalist forces like Enron and Halliburton. 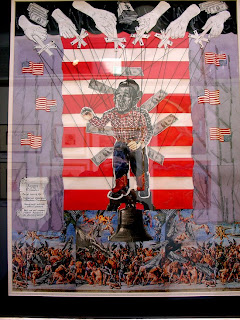 In San Francisco at the Meridian Gallery there were uber famous artists like Hung Liu, Enrique Chagoya, William T. Wiley, Oliphant and Botero, well known artists like Juan Fuentes, Sandow Birk, Bella Feldman, Malaquias Montoya, and unknown artists like Patrick Piazza as well as the anonymous San Francisco Print Collective. The exhibition included a huge range of materials, ideas, and scales of work. As an art historian I favored Sandow Birk's amazing adaptation of Jacques Callot's 16th century series on the Depravities of War and the printmakers working in the Mexican tradition of aesthetic expression with politics like Malaquias Montoya. But the new names were also inspiring. 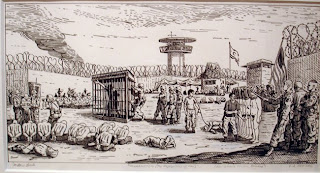 What Art and I are talking about is the purpose of the project as a collective activity, a way to bring together many different artists. On the website he compares it to the American Artists Congress of the 1930s. The big difference of course is that with the internet these artists are much more widespread. They have never sat in the same room and called for an exhibition to resist fascism. But that is what art of democracy artists are doing. Art and I also discussed the difference from earlier political art- there is no collective political ideology among these artists, in some cases there is no political analysis, only a representation of the issue itself, as in the evil Bush. Some of these works succeed as an effective form of protest, a call to action, or a simple statement. A lot depends on the artists' perspectives and background. Hung Liu was trained in Communist China, she knows exactly how to make an image speak. Artists from Chicano art collectives have always understood that aesthetics and politics work together.

But the real purpose is to demonstrate that artists can and do pay attention to what is going on in the world. A lot of them care a lot, but their art training, isolation, and the always negative comments of the mainstream press, discourages the production of issue oriented art. But as the Art of Democracy shows, nation- wide artists are defying the norms of the art world in order to address current concerns.


There were two works I liked the best- both were both aesthetic and potent as a statement. First was the installation of the poems of Roque Dalton seen here, in which the poems dangled provocatively from the ceiling. He is a major leftist poet born in El Salvador. The second was the homage to Pramoedyna Ananta Toer by Priscilla Otani. Pramoedyna Ananta Toer is a major resistance poet that I have never heard of. He is Indonesian and banished to an island Prison on Buru Island. He wrote The Buru Quartet, an epic poem and recited it to other prisoners orally until it was written down and smuggled out. 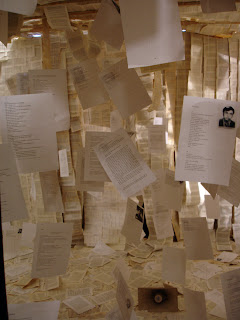 The two venues of Banned and Censored, the African American Museum and Library in Oakland and the San Francisco Center for the Book, could not have been more different. The first is an old Carnegie library in downtown Oakland in a rapidly gentrifying area. But the African American presence intervenes in the genteel era murals in the library, and the exhibitions are a quiet statement upstairs that explodes in our brains all the more resonantly because of the juxtaposition to African American history in videos and photographs. 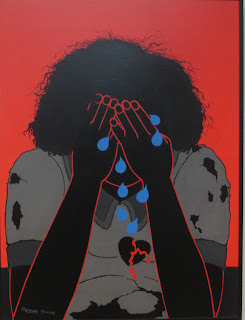 The San Francisco Center for the Book is a place of production, people were making books as we looked at the art works. I am showing you Emory Douglas strong work based on Toni Morrison's The Bluest Eye, called The Assassination of Pecola Breadlove.

My last stop at Gallery Zapatista was even more full of productive energy, hopping with workshops in art and dance, the printmaking workshop making posters for a demonstration, the artists intensely friendly and generous spirited.This is a picture of Gato. He has just finished the poster for a rally and he gave me one to take home. These artists experience activism, art, and community as a single concept. It is a long way from the individualistic art training that prevails in most art schools. 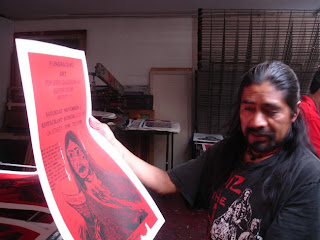 The Art of Democracy reaches across class, race, gender and history to create a community of people who share a common concern in the state of the country. The hope is that that sense of community will continue after the election, that the freedom to create topical art will continue to inspire artists.

The possibilities are endless! Amazingly, The Art of Democracy itself has been censored in an unfolding story. See next entry for the current information.
Posted by Susan Platt at 3:29 PM