Image Wars and Zones of Conflict 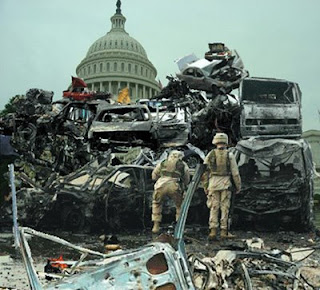 Sam Durant moves the detritus of war in front of the US Capitol.  I have not seen artists address the topic of how much trash is generated by war. War trashes everything in its path. People, animals, culture, land, trees, and leaves a big pile of rubbish tht includes a lot of death. Durant's manipulated photograph very simply confronts us with that fact.
He was one of the artists included in the exhibition in "Image Wars", curated by T.J. Demos
The show was provocative. It had one manifestation at Pratt Manhattan Gallery in New York City along with a symposium. That show presented 15 artists, some working in collaboration, most of them well known. Lebanon, along with Palestine, Iraq, South Africa and the Acoma Nation. The show included mainly video and photography except for Thomas Hirshhorn's drawing in which he is examining his relationship to the political arena in the now familiar tactic of a complicated flow chart. Hirshhorn has made seriously political work. but this piece was included in the exhibition perhaps to be emblematic of what artists think about when they engage with politics.
Other than Hirshhorn who is addressing the artist's own position, the works expand our understanding of what is going on inside of an environment in which military attacks are destroying if not your own building, then the one next door, or in another part of the country (Lamia Joreige). Do you go and look, do you stay home and drink tea. Lamia drove nearby.

Other artists are also telling us what happens with the people who are on the ground, but not actually shooting, what happens to memory, what happens to you? Ghaith Abdul-Ahad is an Iraqi photographer and journalist who was next to a US shoot out of civilians in Iraq. His image of a screaming child in his fathers arms, which I have on my desk, is haunting beyond any image I have seen. It interrupts us entirely. We cannot avoid it. These artists are telling us that conflict is a long, wide and deep place. Ghaith Abdul-Ahad was also part of an exhibition and book called Unembedded. The photographers did work for mainstream media, but they are free lance, and the book includes a lot of work that they couldn't get published.

Image Wars is one exhibition that is part of a bigger project called
Zones of Conflict Rethinking Contemporay Art in A Time of Crisis that included several symposia and exhibitions in London between October 2008 and February 2009. It is attempting to re think the role of artists in the midst of what is being called Zones of Conflict. This is a carefully turned phrase implying that today "war" is no longer what it used to be, a fight between nation states over specific borders, but that it has extended to the war on terror which is dominated by non state actors, deeply involves civilians as combatants and as refugees, and is characterized by media representations that falsify information, oversimplify it, or simply fail to report. Art in the midst of this new environment is playing the role of altering the media discourse.
T. J. Demos is the organizer of all of these events. His four symposia in London addressed
"image wars" ( the subject of the exhibition in NYC), "bare life" (refugees in particular), "uneven geographies", and "transnational social space. " He refers to the fact that these subjects exist in what he calls "rifts of representation" blurring fact and fiction, reinventing documentary photography, collaboration on socially engaged practices, and use of the internet to explore what he calls "heterogenous and uprooted representational structures"

Given the crisis in Gaza, I have been focusing on that in my own writing. In the New York exhibition, Demos included Emily Jacir and Ahlam Shibli, both of whom fall into the category of reinventing documentary photography. But I also found this statement by Anjalika Sagar and Kodwo Eshun a pair of artists in one of the London symposia. They comment on the difficulty of representing Palestine, when it is non existent. How can it be made visible they ask? How has it been made visible? They use as the example the Jenin Refugee Camp, a place where the residents have been repeatedly asked to represent themselves, the artists ask if the refugees could be represented as other than victims? or other than witnesses?
Fascinating as these theoretical arguments are to thinking about the role of art in the midst of crisis,  I feel that artists who are in the situation, who make connections to people are more signficant for me.
Posted by Susan Platt at 9:08 PM