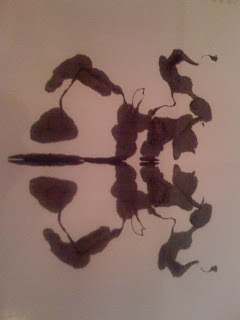 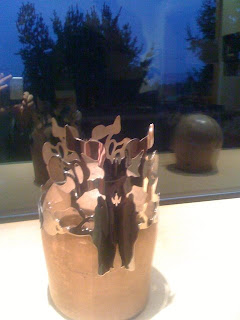 Gloria Bornstein had a small showing of her new work recently. This is what she said about it

"The title of the grouping of Rorschach tests and queens is: "you've been confirmed as queen". I heard a voice saying this in a dream.

The artworks are part of a series exploring the perceptual gap between the eye as optical instrument - and the gaze of the unconscious.

Like Rorschach tests and dreams, the artworks play with objectivity, subjectivity, and the illusionary space in-between.

The artworks developed from one of many dreams I document daily, a continuing practice begun 1974".

After reading Frank Rich in the NY Times yesterday I realized how apropos the mirrors are to the current financial hall of mirrors capitalism is mired in. The queens represent anything you project on them but Madoff (& sub-prime mortgages) are a perfect example of elation/deflation we find in dreams - awake and not). "

These evocative works are eerie, as seen in this suggestive photograph where they are reflected in a window at dusk. They come out of Gloria's Bornstein's subconscious. We love Gloria's subconscious. When I need a jolt in my head I talk to Gloria, who is a private person who rarely shows personal work. But talking to her is always a treat. That is why we were so lucky to have this momentary showing ( or was it a sighting?)

The pieces were in two parts, the Rorschach drawings and the metal "crowns" based on those drawings are set on wooden heads from dummies. This is a great metaphor, a crown coming from the subconscious is placed on a dummy head. It suggests the inversion of the order of things, an accidental person becomes queen.

Since Gloria is so deep, the pieces also connect to Lacan, mirror stages, and dreams. Queens seem like a subject that doesn't come easily in a dream. But a tiara on a wooden dummy head, this is pure comedy, pure outrageous defiance of expectations. I wish more people dared to be this ridiculous and beautiful. Life in the contemporary art world of Seattle would be a lot more interesting!. 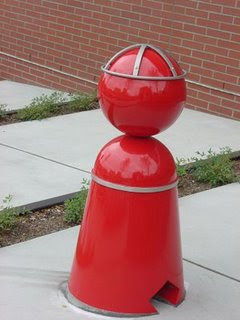 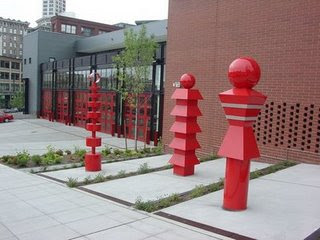 Gloria also has a public side: She has done a lot of incredible public art. Here I will mention only the Sentinels at the Fire station in the International District. This is what she told me about them:

"Inspired by forms found in Asian Art, architecture, folk craft, and public safety, the multi-sculptural environment represents the guardians of the city. Just as the staff of Fire Station 10 Center in the Chinatown-International District is responsible for the public safety of the city, the surrounding Asian community has been standing watch over the interests of their neighborhood. I wrote the art plan "Different Voices, One Community" after interviewing the folks that make up the tapestry of 's Asian community. Basically, the firefighters of 's oldest station in Pioneer square-have a historic relationship with the community that goes back 100 years. At that time, the city had laws prohibiting firefighters from putting out fires in "". The firefighters helped change the laws. When large buildings were condemned, they arranged for neighborhood residents to work round the clock to bring them to code & meet city deadlines."

Is this not wonderful information. These sentinels bring together art history, political, cultural connections, and 's history of racism. Looking at these red sentinels we see iconic forms, a little like pieces on a game board, they interrupt the dreary area of Seattle where the fire station is. They declare themselves, they say stop, here are people who are going to suddenly rush out to help us in an emergency. Here are sentinels!

What is amazing about Gloria's public art is that every piece is different. See her website to know what I mean.