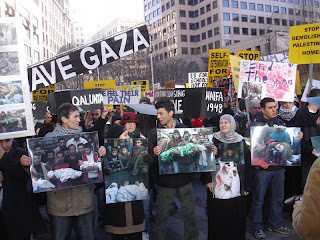 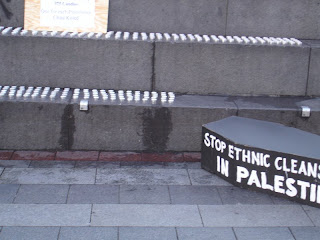 Last Saturday hundreds of people turned out to protest the massacre in Gaza. It was really a heavy and sad demonstration, but it was important to be there. We walked around a big double block in downtown Seattle, chanting.
The desperate situation of the Palestinians in general is what made it so sad. If you look below the completely biased US news coverage, the actual situation is that every major city is an outdoor prison, the wall is strangling the Palestinians movement and psyches, the military occupation is pervasive, and probably the other cities like Ramallah, Bethlehem, and Nazareth are thinking, we are next. The brief hiatus in the killing is just that. 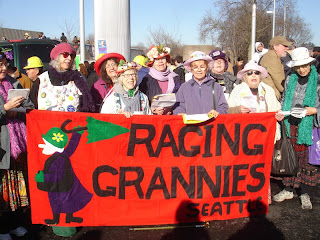 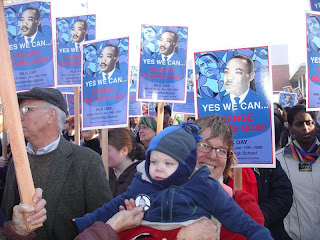 Then the next day we had the MLK march, the best march of the entire year because it brings together everybody in a spirit of unity.Here I am with my grandson. We were also singing with the raging grannies. This is Max's second MLK march. Last year he was only two months old. This year he went the whole way in his stroller, walking, and in my arms. It is the march above all others that I feel gives us hope.


Of course this year it was overlapped with the inauguration of Barack Obama the very next day, a supremely exhilarating day. It is hard to believe that we are actually rid of those crooks. Let us hope for the best. So far so good. But if Obama doesn't really redefine the discourse in Israel/Palestine, which is almost impossible to do given the bias and ignorance in the US, the situation will be that we continue to fund Israel's obliteration of Palestine. But many groups are working to try to help Obama to understand that a "better world is possible." He has told us we all need to be activists. He cannot change the world alone. WOW, what a relief!! I want to feel this way for awhile. 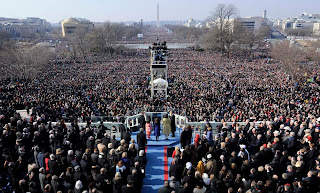