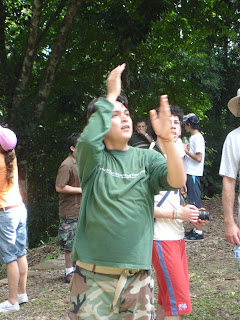 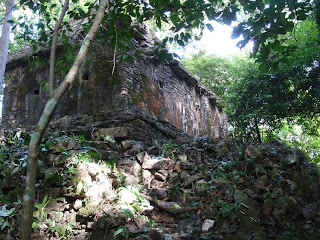 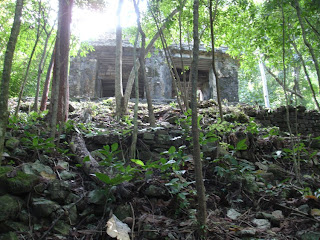 Near Palenque in the jungle is the forgotten temple. We went there with our guide Edgar (here is in the green shirt). It was covered with lichen and crumbling into the jungle. As we sat on the front steps we saw a family of howler monkeys. But what is really evident is that the jungle is heavily impacted by humans. It was nothing like what I expected. Jungle means to me inpenetrable forest, so lushly overgrown that you can't pass through. This jungle had small trees and lots of light. That suggests that it isn't that old.

We went through the jungle easily, but it was still beautiful. Edgar said that the area around Palenque has lost its designation as a bioreserve because a very high percentage of the jungle is lost to development, particularly cattle. That means all of us eating meat, all the Mexicans eating meat are affecting the jungle. We have always heard about Burger King and Brazil, this jungle is closer to home. We saw an exhibit about the jaguar hiding deep in the forest, but its shrinking habitat is threatening it with near extinction. But the connection wasn't made to eating meat. 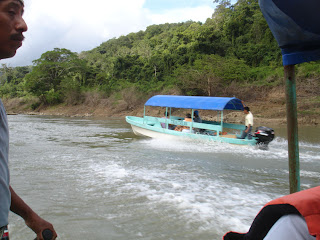 When we went to Yaxchilan we went on a motor boat on the Usumacinta River, the border with Guatemala. It was quite easy and accessible, but Yaxchilan is deeper into the jungle, the setting is even more lush and beautiful than Palenque. We went through a dark dark labyrinth when we arrived: that was a place for the king to get in touch with the cosmic gods. He stayed in the ninth level down for nine days, then re emerged with new powers. 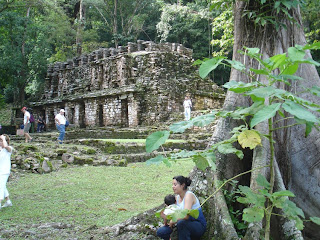 Yaxchilan (it means green place) was a commercial trading center, but it had rituals and ceremony also. Carolyn Tate has analyzed it as a ceremonial city. It traded jade from Guatemala to 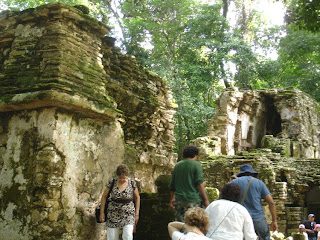 Palenque. It has many steles and lintels showing such subjects as penis piercing, and the blood dropping into a bowl. This was another way of gaining power and of nourishing both the king and the earth. It had a feminist site, representation of a queen doing tongue piercings (stingray needle and rope passed through her tongue leading to hallucination, the best stele of this is in the British Museum, stolen by an early explorer) that also represent gaining power. The ball court was also prominent, and reliefs of ball players. This game was real, symbolic, political, impossible to play, and metaphorical of life and death. The ball game figures prominently in the Popol Vuh the early post colonial record of the Mayan creation story. Once there were 12,000 people living here. The main leaders are Bird Jaguar and Shield Jaguar. 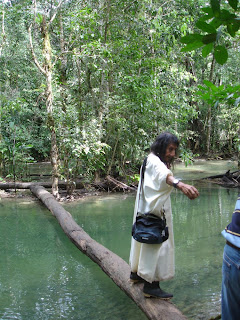 After Yaxchilan we stayed in a Lacandan village. The Lacandan are the smallest Mayan ethnic group ( there are 13 different ethnicities today).When the Spaniards came there were 68 different cultures and 24 million people. After the Conquest they were reduced to 4 million. The Lacandan were traditionally living deep in the jungle until roads invaded it in rather recent years, the mid 1990s. Now their life style is also threatened. But they have a village where they put up tourists and take them on a walk through the jungle. We walked for five hours across rivers on logs and rocks, helped by our Lacandan guide who reached out 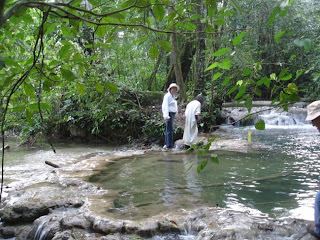 for us, told us about medicinal plants and was generally charming. When I asked him about Bush and Obama, he said the Mexicans 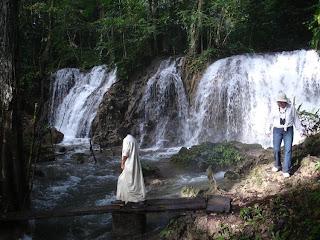 booed Bush when he came to Mexico and he likes Obama. There deep in the jungle we had this conversation. He also led us to a Mayan temple in the jungle, a small structure crumbling in the woods. There are hundreds of unexcavated temples.
Bonampak is in the Lacandan area of the jungle. It is a site with murals that are disappearing as people stand in line to look at them and breath on them.
Posted by Susan Platt at 7:56 PM

Email ThisBlogThis!Share to TwitterShare to FacebookShare to Pinterest
Labels: jungles Lancandan and Yaxchilan

When I asked him about Bush and Obama, he said the Mexicans booed Bush when he came to Mexico and he likes Obama. There deep in the jungle we had this conversation.

Everywhere. It moved me to tears to read of the intense interest / fear / concern people everywhere experienced about the election here. I don't think most Americans even think of the profound impact what we do (or don't do) here has on people elsewhere.

Thanks BigAssBelle Its true.
I have added some pictures now if you want to see what the jungle looked like
Susan