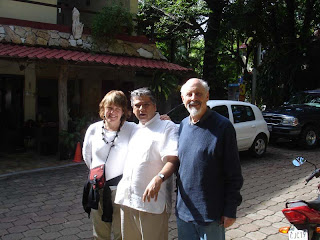 Here we are in Palenque in front of the Xibalba Hotel with the owner Marco. Xibalba means underworld in Maya. But this hotel is perfect for the traveler who doesn't want fancy accomodations, but warm people, good food, and joy. There is nothing underworld about it.

My friend Carolyn Tate who is an expert on the site of Yaxchilan told us about it. See the next post to learn about her book.

The Maya sites of Palenque, Yaxhilan, and Bonampak, are amazing. No one I have talked to has ever heard of them! In comparison Chichen Itza is only about architecture with much less surviving art. The reason is that in Palenque as well as Guatamala and Hondurus are the sites of early Maya culture.
Chichen Itza and Uzmal are much later. They are more familiar to people because they are near Cancun, the beach culture and therefore more accessible. 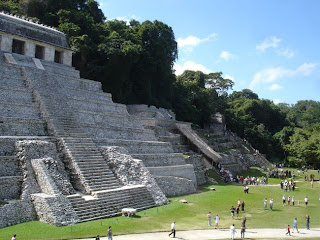 Palenque (Las Ruinas) has impressive temples, palaces, and other buildings that rise in the midst of the jungle.There are a total of 1453 structures, 24 have been restored between 1940 - 1979, we see the seven biggest. It was first discovered in 1786 by the Spanish. The site was built in the 600s ( according to our calendar, the Mayas used three different calendars for dating- they were obsessed with time among other things).
The Maya King Pakal was an amazing person, he lived twice as long as usual ( to 80 years old) and built himself a secret underground tomb that wasn't discovered until 1952. 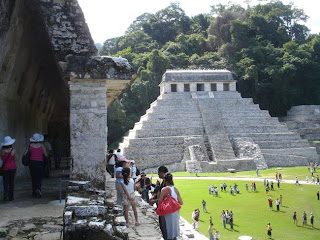 On the lid of his sarcophagus is one of the amazing works of classical Mayan art. 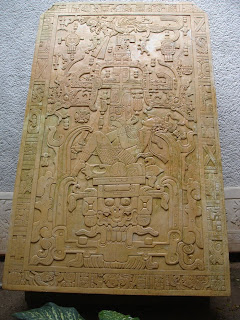 This is a photo of the replica of the lid at the Xibalba Hotel, made by Marco's family. It rises three stories through the courtyard of the hotel. It shows King Pakal dying and descending into the underworld (shown as big jaws of a snake with a n incense burner in his open mouth at the bottom) , but the great part of the story is that when King Pakal goes into the underworld he nourishes the tree of life, which is in the center of the lid with a huge magic bird on top, so it is showing death and regeneration based on the Maya creation myth. In the middle of the tree is a two headed snake, an umbilical cord connecting different worlds ( it appears on a staircase at Chichen Itza).
None of these many details are visible in this image, but take my word for it, that is just the beginning of what the lid tells us and what the Maya believed.The lid was never seen for hundreds of years until it was discovered. But the original still sits deep under ground ( nine levels to be exact, the nine levels of the underworld).

The complexity of the belief systems of the Maya is staggering, cosmology, astrology, measurement of time in millions of years, the idea of zero, mythology, agriculture. Then there are the inventions, we saw a toilet, a steam bath, and a septic tank, in the palace.
The caricatures of the Maya that tourists are fed at Chichen Itza are entirely made up according to Linda Schele in her book the Code of Kings. 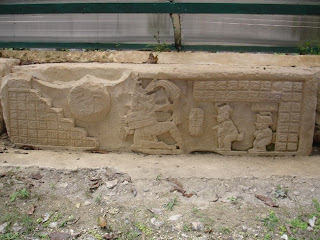 The Ball Game, seen here at Yaxchilan, seems to have been a metaphor of life and resurrection, the main theme of Maya culture. The Ball Park was a crack in the earth that connected to the underworld. The ball players could only hit the ball with their hips and elbows, they wore stone yokes and huge padded outfits. Kings had to take authority by playing the cosmic game. On the right are two dwarfs. The squares around the ball game are all glyphs telling exactly when this is taking place, dating back symbolic eons. The Kings took their power by connecting to the earliest cosmic dieties, as well as through their knowledge of astronomy. Of course if we compare that to rulers today of supposedly democratic countries, a divine connection is still being invoked, and power is from secret knowledge and languages not shared with the rest of us.

Palenque also has the group of the cross, three temples that face each other and create together another reference to death and resurrection through the underworld and return to the earth. This photo shows us after we have completed the cycle and are standing on the temple of the Foliated Cross. All of these temples have stunningly complicated low relief sculptures showing various stages of the King's transformations ( this is the son of Pacal, Chan Bahlum II). Please forgive me this cliche touristic indulgence (we were there). 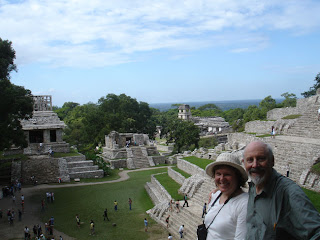 But we had such a great time climbing up and down these three temples, I couldn't resist.
The next installment if I don't get distracted with other work will be on Yaxchilan, Bonampak, and Merida. We also went to an eco hotel in a biosphere. Too much to write. 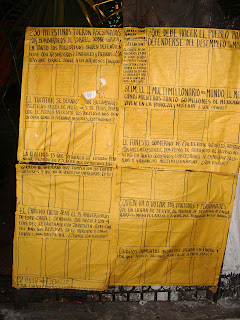 Overshadowing our trip were the horrors of Israel's slaughter in Gaza, which I followed with so much sadness and 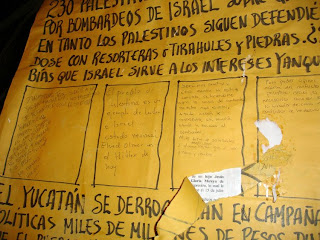 horror. US tactics, US weapons, obviously taking advantage of the transition in this country. All I could think of was, how we look down on the Maya as primitive for practicing human sacrifice, but we slaughter our own race with no control. The newspapers and tv in Mexico covered the Palestinian side thoroughly showing interviews with Palestinians, the protests of the orthodox Jews in Israel against their government, and page after page of the invasion and destruction. This is a poster asked us to write our opinion about whether the bombardment of Palestinians by Israel was serving Yankee interests.

Beautiful description and photos. I can't wait to get there.

The newspapers and tv in Mexico covered the Palestinian side thoroughly showing interviews with Palestinians, the protests of the orthodox Jews in Israel against their government, and page after page of the invasion and destruction.

And here we have Joe the Plumber expressing outrage that the minimal information we're given about the tragedy is shown at all. He recommends a return to the war propaganda films of WWI and WWII. That gets everyone on the same damn page with none of this trifling about insignificant things like dead Palestinians.

Hi Big Ass Belle again
Thanks for reading everything. I am glad I missed Joe