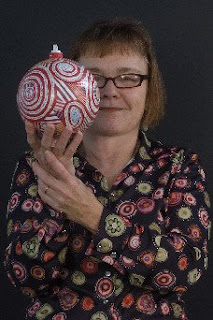 http://seattlepi.nwsource.com/local/390300_ornament03.html
Deborah Lawrence my good friend and politically engaged artist has pulled off a big media coup. She was invited to make an ornament for the White House Christmas tree: her ornament honored the radical history of Washington State including Jim McDermott's support for impeachment, WTO, and the Seattle General Strike of 1919, in tiny writing that weaves through a stripy design. Deborah has been using flag related colors and stripes for awhile, so it was the perfect moment to make a statement.
She was censured from the White House Christmas Tree.
And the media storm has played nationwide. There seem to be multiple issues coming to the fore: bad manners, out of the Christmas "spirit", "evil, maniacal artist" . So three in one, what is courteous about Christmas trees in the white house, it is just a PR gesture to cover up Bush's wars against people and the planet. Even as I write he is reversing every environmental regulation he can think of. What is Christmas as wars and killings go on and on in Iraq, Afghanistan,Palestine and elsewhere, directly or indirectly the result of the policies of this particular white house. Why do people find artists "evil" when they speak truth to power, the real point of being an artist.

Lawrence was the only artist among the over 300 who participated to use the opportunity to make a statement. And she has eloquently and calmly stood up for what she believes in on right wing talk shows and other media.

The arguments against her action by conservatives were that she was being "rude" because she had an invitation into "someone's home" and was exploiting it selfishly to her own ends. That Chistmas is not the time to be political. What about that. Why not? Christmas is already political. All right so when we are actually eating dinner on Christmas, or opening presents, we might have to be a little careful with our immediate families, but why should we suddenly stop paying attention to what is going on; people are still dying, people are still wounded. That is exactly what Bush wants us to do, forget all about it. And Deborah refused to let him off the hook. Unlike the Congress and so many members of the American public who want to simply move on. She is speaking ( quite subtly actually) to the horrendous crimes that Bush has committed.

They said she was too obvious, why couldn't she be more subliminal ( that was one of the more supportive comments)
She lacked "class" - an odd statement I couldn't quite fathom that was repeated many times. What did they mean by class, what is more classy than a subtle subversion of ornament into art.

Her response is that she was honoring the state and Jim McDermott for this signing on to the impeachment of President Bush. She was making a statement, but she always makes statements. Here is the artist in her own words.
Anybody that knew Deborah, knew she was going to do this. Like my son in law said, it is the story of the frog and the scorpion, she is a scorpion. He also compared it to Diego Rivera's mural at Rockefeller Center, which was destroyed because it lowered the real estate values by honoring the worker and communism too prominently.

I am thrilled that Deborah has not only stood up to the media, but done so calmly and articulately. Laura Bush gave far more prominence to the ornament than if she had hung it, and by extension it is bringing up the continual need to impeach Bush and to prosecute him for war crimes after he leaves office.

It tells you that she is trully political, in her fiber. She knows how to handle real world politics, as well as subverting the decoration on the white house Christmas tree which is itself decorating the committing of war crimes and the horror of the last eight years. The Washington Post comment line had this great comment:

"I completely agree it is egregiously belchworthy to use a holiday for political purposes instead of a family or spiritual gathering.

So why are the Bushes even soliciting ornaments from Congress? So the everyday folk can feel like they are heard inside the beltway? So the Bushes can show off their all-American fantasy life, while the rest of us are in foreclosure and have kids in Iraq?

Why is my tax money used to buy an extremely large tree for the national mall? Christmas is a religious holiday. Why are my representatives wasting time with ornaments instead of dealing with the financial meltdown or terrorists? Does leading the country necessitate having opulent Christmas decorations? No.

I was really really hoping that the White House was going to abstain from hanging ornaments in deference to all the killed and wounded soldiers who wouldn't be home for Christmas this year, but alas, the opportunity was used to politically snub some congressman."