I am finishing my book, so my blog has taken a back seat, but I must write a quick note about Seattle's art festival Bumbershoot 09. I have loved going to this arts festival since I moved to Seattle in 1998. But it certainly has changed. It used to be full of informal creativity, clowns, the amazing spoon man, acrobats, magicians, simply moving through the festival. There was an entire paviilion for publishers and literary readings lasted all weekend.

Now we have high tech spectacles like Flexion by Wise Fool of New Mexico ( muscle acrobatics) and Rockstar Energy Drink Vert Ramp ( skateboarding ). They were big machines . Man and Machine. Also there were lots of other techie booths. The arts and crafts which used to be a highlight have declined dramatically. A few survivors include my favorite hat store, but most of them are not too interesting. That is probably because of the increased cost of a booth has shut out all but rich people, and people who sell well are usually less aesthetic ( I shouldn't generalize like that, but I can't help the facts on the ground, the jewelry and clothing was less individually interesting to me).
Literary arts are now simply a few readers and a small display from the Unviersity Book Store. Granted the readers were in a big theater, but the numbers are small. And guess what they were all white people. Whoops. They were funny, talented and in some cases amazing, as in the case of Tara Hardy, who is really formidable. But is spoken word poetry a type of white rap??

The creative performances that I saw were terrific, but they were all really professional! Like Bach's 40 Goldberg Variations performed entirely by heart by an amazing pianist named Francoise Papillon, accompanied by Mark Haim ( here is one dance) and assorted other dancers ( apparently Jerome Robbins did dances to Goldberg variations, but they costumes were not modern, Improvised Shakespeare, and Performance Space 122 from New York City.

Thank goodness for Greg Lundgren!. He brought back grass roots creativity with his Vital 5 projects. He believes that "our ability to communicate through art is what defines us as human" according to his web site.
He had people dressing up for photographs in random creative clothing, 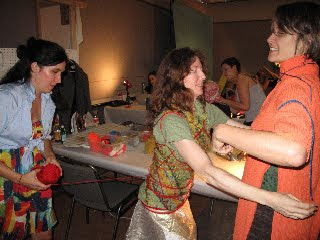 designing buildings in cut out paper 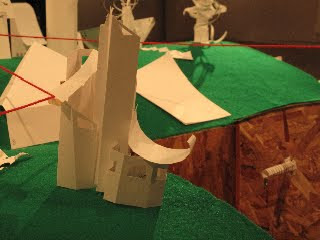 and a documentation of a third project, making an art work in a shopping cart. 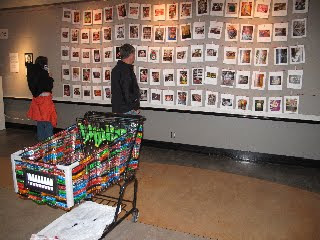 They were all in the context of his "Dada Economics" which is one of many projects that he pursues, in this case, random financial awards, that encourage ordinary people to be creative.
Posted by Susan Platt at 4:27 PM