Roger Shimomura and other shows 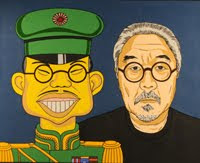 I miss my blog so much, I am really tired of editing my book, so here is a quick entry late on Saturday afternoon.
The Roger Shimomura show "Yellow Terror" at the Wing Luke Museum is a rare opportunity to see the artists collections of racist kitsch juxtaposed to his paintings. The kitsch collections have been given to the Wing Luke Museum, but the really urgent reason to go the show several times is to see the way he brilliantly uses these racist stereotypes in his art. He barely transforms them, except in scale. We can hardly believe how well he does it. 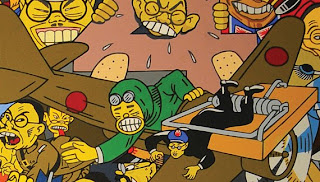 Yellow Terror, the title piece of the exhibition- this is a detail- is a dizzying array of World War II "Japs," crammed against each other, flying through the air, climbing on top of each other At the center is the artist himself calmly self caricaturing himself in the midst of the mass of caricatures. The caricatures sources are all on display next to the paintings, and unbelievably, we find ourselves laughing at Shimomura's humor, at the same time that we know he is deadly serious. Racist stereotyping is so awful, it is hard to believe.
As in Different Citizens, 2009, above, a self portrait next to a Japanese stereotype This is a large painting,three feet by almost four feet. There is Roger on the right, he is an understated quiet person, a distinguished professor. There is the stereotype, the big ears, slanted eyes, big mouth, buck teeth, and the officer on the left. But the point here is not old/new, The point is that the World War II stereotypes are still with us. Everyday, everywhere. That is why he has included a collection of salt and pepper shakers. Racism with your salt.
It permeates, it sits there. The salt and pepper shakers are passive little stereotype"Orientals" in ethnic clothes, waiting to be picked up by larger powers!
Even at the opening, he pointed out an account of a new racist film The Goods, Live Hard Sell Hard" which has a mob beating up a Japanese American. Nothing has really changed except the surface.. 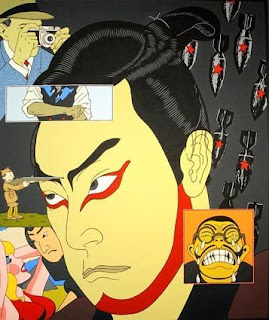 Roger's artistic facility with different vocabularies is also astonishingAs seen in the other painting here, American Portrait no 2, 2002, Shimomura can play with traditional Japanese images, Walt Disney cartoon types, Marvel superhero comics, formalist principles, and all arranged in amazing compositions that are far more complex than they appear to be. This composition with its boxes within boxes and the idea of a may different types of stereotypes juxtaposed to the Kabuki actor playing a warrior from Ukiyo e prints ( is this an "authentic" stereotype?), is all by itself worth a long analysis.

I highly recommend Jen Graves article in the Stranger as a great review. 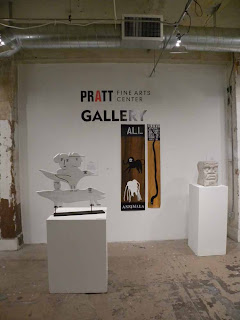 On the subject of opposing racism, a different perspective is offered by the James Washington House exhibition of artists who have had residencies there which is currently on view at the Pratt Gallery. The opening itself was a delight. Tim Detweiller has brilliantly brought together a wonderful mix of artists from different backgrounds, all of them making provocative work inspired by the studio and left -behind materials of the sculptor James Washington. In this installation shot you see Joe Max Emmenger well- known Seattle artist next to Charles Parrish work known only to some communities. 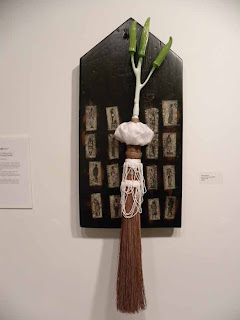 This is Daniel Minter's work New Path Revealed. It is a subtle work, a broom, with beading and a silk shower cap like top that becomes a ceramic okra plant. In the background are prints of various African American figures in traditional types of work. 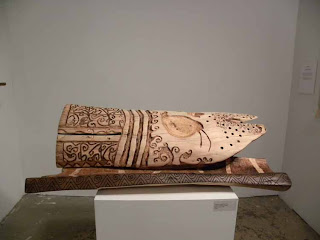 Then there is the wooden sculpture by Romson Bustillo called A spell to remember or forget. Bustillo is a brilliant artist and community activist. He is from Mindanao, Philippines. He draws on abstract patterns from textiles here, and other sources to create evocative pieces that contain magical energy. 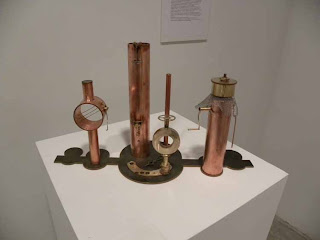 Esther Ervin's Pipe Dreams is self contained, elegant, and dreamlike. Ervin is an artist with a subtle sensuality that plays out in different media. At the James Washington House she worked with the wax thread on spools from old recording devices.
Other artists in the exhibition included Marita Dingus, and Jite Agbro, but I am out of time for now.
The point is that each of these artists is approaching the inspiration of James Washington from their own perspectives and different backgrounds. And the opening was a truly mixed group of artists and audience. Bravo James Washington Foundation.
Posted by Susan Platt at 3:58 PM