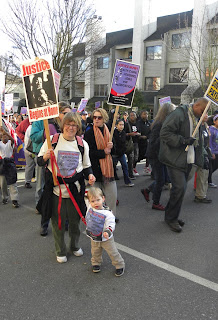 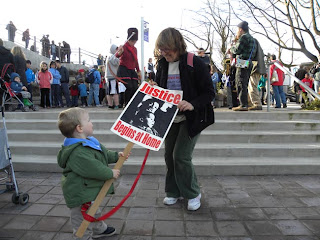 This is the third year that my grandson Max and I have gone on the Martin Luther King Day March and he is only two years old!. The first year he was only two months old. I have a picture of that on my Flickr site. Last year he was just over one year, and I put that on my Christmas card This year as he marches along he makes it to the blog. His shirt and mine are supporting health care, education, housing and jobs, these are the same issues of economic justce that Martin Luther King spoke so eloquently about as the means of real equality for all races as Bob Herbert wrote so eloquently in his editorial today. As my grandson and I marched, we were surrounded by people who agree, who care, who are uplifted, as I am, every year, by this holiday. The march in Seattle always begins with workshops and a rally, it is more embedded in activism than the church concerts and community celebrations.
We urgently need to keep political activism going in the community. Last year this day coincided with the inaguration of Barack Obama. Blacks were thrilled, we were all hopeful.
This year we see reality. We are still in the struggle.
Obama may have had all the right ideas inthe world, but when he comes up against the huge forces of power, the corporations, the military, he plays ball. Under FDR the bankers got the first stage of relief in the 1930s, but then he turned to the workers and created huge jobs programs. We can perhaps attribute this and his funding of the arts to Eleanor Roosevelt's emphatic tours of the country as the eyes and ears of the President. Could Michelle play the same role, it doesn't seem so.
So Max and I marched for his future, and the future of all of us, and the planet, and in support of a better path. I would love to start a group of activist grandmothers who want to join me in political marches. (can't join the Raging Grannies, I don't sing), but who knows how to go about it. I would like Max to understand that organizing in groups and collaborating is essential to a better world. Marching alone is one step, marching together is the next step. Collaborating is the way to power to resist oppression.
I got to one workshop sponsored by Veterans against the War and other groups on how to resist recruiting in high schools. It was really good. The military are going into even elementary schools to start the seduction for recruitment. A young Iraq veteran explained why he had enlisted, for "freedom" which as he said, is at the expense of the oppression of poor people around the world, for "serving a noble cause" which as he said was a lie, as you are killing, torturing and terrifying women, men, and children, and locking up journalists.
Posted by Susan Platt at 4:52 PM