Liana Badr Eye of the Mirror 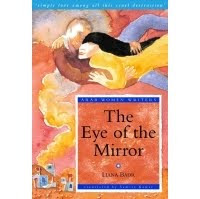 This will be a short but heartfelt post about Liana Badr's The Eye of the Mirror, a book in the Arab Women Writers series. It was published in 1991 and has just appeared in English. Badr spent seven years interviewing survivors of the massacre at the Tal el-Zaater ( or Tal Ezza'tar) Palestinian refugee camp. This book gives us a perspective on women's lives in a camp during an onslaught of attacks, in this case in Lebanon in 1976, by "Christian" militias. The description of the progression from a barely lived life in the camps to the attacks and eventual massacre and evacuation of the people who lived there ( including some flashbacks to life in Palestine before the camps)is riveting and heartbreaking. It forms a partner to Joe Sacco's book discussed below, as it provides the women's experiences. While Sacco talked to women, this book gives us the day to day detail of their lives, cooking bread, giving birth, surviving with less and less, the courage of children, the deterioation of people even as they keep going, the final fall caused by the loss of the last waterpipe. The constant barrage of sniper's bullets, the final massacres, random violence, and wanton looting and destruction of the little that was left. There are many characters, mothers, grandmothers, grandfathers, fathers, children, adolescents, young women, all strong people. The book is described usually in terms of one main character, but I felt that all the characters were equally important.
Posted by Susan Platt at 6:32 PM

Email ThisBlogThis!Share to TwitterShare to FacebookShare to Pinterest
Labels: "Eye of the Mirror", Liana Badr