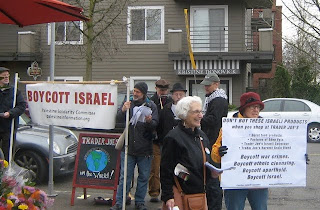 That is eighty year old Judith Kolokoff next to me at what we called an informational demonstration at Trader Joe's. We are nationwide and internationally joining people who are calling for divestment of Israeli investments and sanctions against Israeli products. Trader Joe's carries cheese made on a farm that was land taken from Palestinians.
It carries herbal pastes and coucous with a Trader Joe package that come from Israel. We are letting people know that they should not buy these products in support of the international boycott. Personally, I brought some of the cheese up to the service desk and complained and they said the company policy was to let people vote with their pocketbooks. So I have voted by not shopping at Trader Joe's anymore ( that I realize is too extreme for most people, but their packaging is also terrible, and they carry endangered fish as well). The Israeli boycott campaign is not asking people to stop shopping at Trader Joe's, only to stop buying products made in Israel.
Judith Kolokoff has a beautiful smile. She is a beautiful person. She told me that she has been demonstrating since she was ten years old in Chicago, when her parents were opposing Franco, Nazis, and fascism in Spain in the Spanish Civil War. She is a testimony to the fact that demonstrating is good for your health! I felt much better after this one hour of participating, than just sitting at home grumbling. If everyone got out for a cause just one hour a week, we would all be happier.
People say it doesn't make any difference to demonstrate. But did you know that fire ants brought down the super conducting, supercollider in Texas. They were all on it and they destroyed it. We can do the same.
The new Obama budget includes 3 billion in military aid to Israel, but we can't afford basic health care for people in the U.S. If you want to know how much your state is spending on military hardward for Israel, look at this website. In my state, Washington, up to 2018 we are giving 731,757,769.
Posted by Susan Platt at 10:58 AM