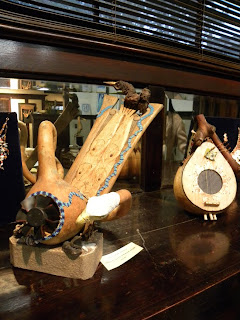 The Ethnic Art Gallery in the Seattle Municipal Tower is on the third floor. It exists thanks to the hard work of a group of dedicated city employees. Esther Ervin curated the exhibition for Black History Month called Interpreting the Black Journey Eight Viewpoints. These are two of her works that were not in the show . The one in the foreground is called River of No Return and refers to Salmon runs.
There are eight artists in the exhibition. Yadisa Boija, Esther Ervin, Al Doggett, Eddie Walker, Sultan Mohammed, George Jennings, Donald Leonard, and Fasika Moges. How many of those artists have you seen shown in Seattle art galleries?They don't fit the mainstream definition perhaps, their work is too realistic, or too abstract, or too personal ? There is a subtle difference between artists whose work is acceptable for commercial galleries and art that is not. Most of these artists went to art school, most of them support themselves in an art related field. But they follow their own paths. They are not trying to fit in with a current style or a current issue.

They are all artists of African American heritage. But there are other artists of African American heritge who show in commercial galleries also like Ron Hill and Marita Dingus, so this is not a simple question of racism. I will do an image gallery to show you all of their work. You can decide for yourself why they don't swim with the famous fish of art. 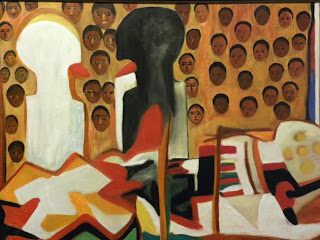 Sultan Mohammed Riots 2007 This is the story of the revenge and rebellion of Queen Yodit (Judith)who ousted the ruler of the ancient Axum Kingdom. and ruled as a warrior queen for forty years, according to legend. 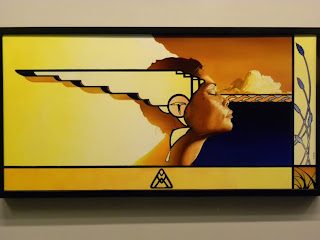 George Jennings NaKeesa A portrait of his wife 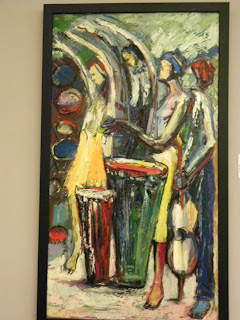 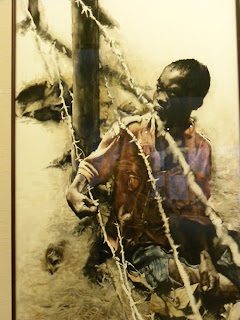 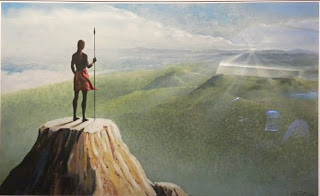 Al Doggett Samburu Land -looking over his lost land. The guard in the exhibition told me how much he loved this work because he was from East Africa and was eager to tell me about the Masai who live there. 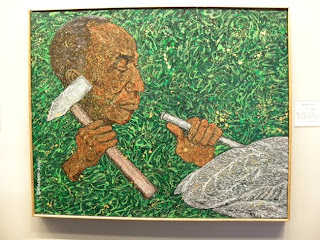 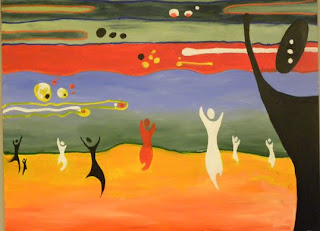 Yadisa Boija Recession an artist from Ethiopia. He says "We hear about the struggles of corporate financial institutions. We worry about the spending habits of consumers, charts, polls graphs. But who cares about ordinary people?" 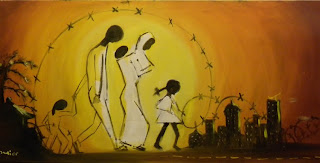 The title of this work is Invisibles and Boija's label says that it "chronicles the life and struggles of immigrants new to their community and unaccepted in their homeland. They walk quietly unnoticed and unrecognized. "
Posted by Susan Platt at 3:44 PM