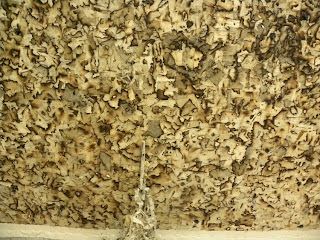 I had the good fortune to meet two Iraqi artists during a brief stay in London. First Hana' Malallah, whom I have written about on this blog before. She left Baghdad in the fall of 2006, reluctantly driven out by the war. She has been in London for two years now and has a studio where she is producing art works using canvas that she partially burns, then rips, cuts, and collages onto larger canvases. The result is imagery that is both painfully specific and absolutely abstract, a rare phenomenon. Naturally the paintings recall the destruction of art in Baghdad and the destruction of Baghdad which now, she states, has no government. The change has been shocking and absolute, particularly for professional women. Those who remain must be covered when they go outside and still risk being killed everytime they walk in the street. 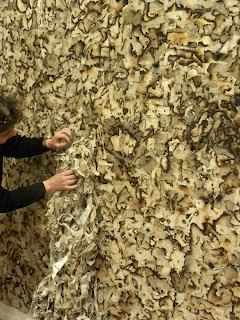 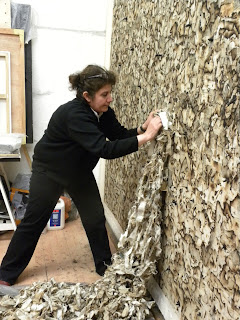 Hana' taught at the College of Fine Arts, Baghdad University. She also earned a Ph.D. in art theory there.  Art students came from all over the Middle East and Europe, and could attend free of charge. Saddam Hussein abolished private universities. Now the University where she taught has lost its faculty to diaspora, it building was ravaged, its library destroyed and private universities are returning to Baghdad.

She told me of the deep contradictions of life under Saddam Hussein, there were no elections and if you joked you could die, but prior to sanctions she could travel freely. She had six works purchased by the government in the Modern Art Museum.
During the sanctions, Hana' went to the archeological museum for inspiration.
She stated that she belongs to a group of artists who are pursing the theme of ruins, who all belong to what she called the "80s" generation in Iraq. They include Kareem Risan who left in 2004 for Syria and now lives in Canada, and Nazar Yahya who is in Jordan. 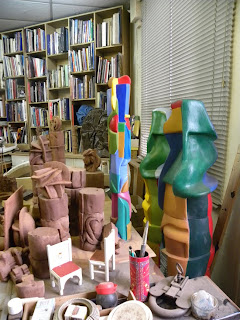 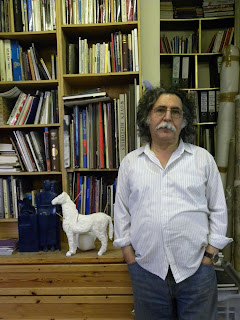 At the end of my trip I visited a second Iraqi artist, Dia Azzawi. He is older than Hana'. He has a degree in archaeology in 1962 from Baghdad University, then a degree in Fine Art in 1964. He worked at the archeology museum until the mid 1970s when he left Baghdad. He said it was "politically obvious that he could not stay. "


Azzawi is a fiery, brilliant artist. His creates monumental abstract sculpture, large paintings, mixed media "objects" and  small book art works. He is currently working on a monument to the over 600 PhDs who have been killed in Iraq. The targetting of intellectuals has gone almost unreported in the media.  This is a preliminary study for the monument. 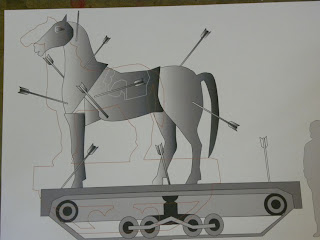 Azzawi makes detailed references to Arab poetry and historical art. For example, in a recent work a photograph of his father shows him wearing a type of scarf as a headress that we associate with the Palestinians, but he juxtaposes it to Gudea of Lagash, the ancient lawgiver of Mesopotamia who wears a similar headdress. Fortunately we had just seen that stunning work of art in the Louvre.
He bemoans the lack of knowledge of their own history of art among Iraqis.
He is also a collector of contemporary art from Iraq.
He suggested to other artists the idea of  book art, a new format for Iraqi artists that was easily transportable. Selections from his book art collection have been shown in the U.S. in several venues with the title Dafatir, curated by Nada Shabout.

Azzawi  is also a curator. He has just created an exhibition called My Homeland of the work of seven Iraqi artists in Dubai and is also contemporary art advisor and curator for the Qatar Museum.
He explained to me that there is a big market in fake contemporary Arab art. As the market demand has grown for contemporary Arab art, particularly among the emirates, who have a lot of money, but don't know much about contemporary art, the collecting of works of name artists has led to the production of fakes. Jawad Salim for example, a was a premier Iraqi modern artist who was commissioned in 1958 to create the  Monument to Liberty in Baghdad, by the newly created Iraqi Republic (1958 - 1963, led by Abd al-Karim Qasim whose ties to Nasser led to his assasination by Baathists in collusion with the CIA)   Jawad Salim died in 1961 before his sculpture was completed. His work is currently being forged from old photographs. 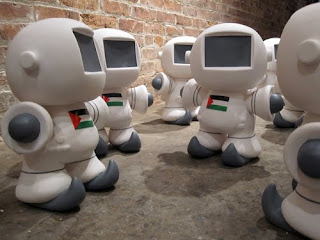 Finally, the work of Palestinian artist Larissa Sansour is in an exhibition in Paris. Above you see her Palestinauts. I have followed her video work for two years and I think she is one of the most talented video artists addressing Palestinian issues (and the competition is stiff)

This show featured "Intergalactic Palestine. "All of her videos are riffs on populist genres, from cooking shows to horror movies, with the deeper metaphor of the anguishing condition of Palestine. But her trademark is that we laugh as we cry.
This video is a riff on science fiction about space. She even uses a remastered sound bite from Stanley Kubrick's 2001 "A Space Odyssey."
It starts with the artist, as a Palestinaut (cosmonaut plus astronaut), in her space ship, getting ready for take off. We hear "Jerusalem, we have a problem" , then "everything is back on track." She lands on the moon and plants the Palestinian flag, walking carefully in her moon boots. She declares " One small step for Palestinians, One giant leap for mankind" as she waves to the earth. Then she floats away into space and disappears. 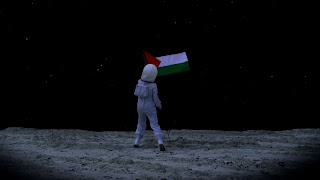 The artist has explained " The work reflects the fact that Palestinains are in limbo, without a state, as their homeland shrinks like a spot on the horizon . . . The moon landings reflect a widespread anxiety,  that in leaving home, we might never be able to return home again.Yet because this anxiety is universal, the pain of the real forced exodus of the Palestinians is doomed to remain a private grief, forgotten by the rest of the world."
Posted by Susan Platt at 1:27 PM

Nice, keep it up.. Thanks for the info..your article is excellent,i really love it. hoping to read your following post