Provence then and now 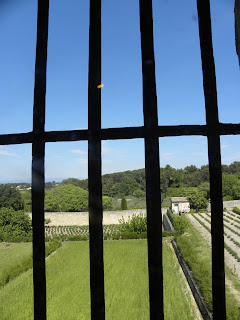 In our trip to France, we visited St. Remy (the asylum where Van Gogh painted some extraordinary artworks), this is the view out of his window from his tiny room. It is my perverse nature to begin our trip with a view of his barred bedroom.  The olive trees look just like his paintings. 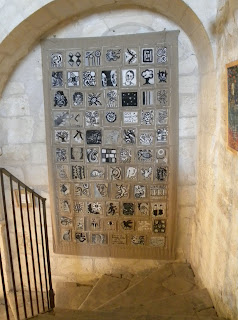 The asylum continues in use today, and there was a mural created by children living there. I guess having had a really famous artist living there must be an inspiration to them. 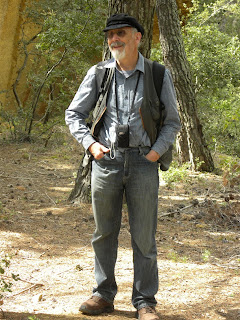 Aix en Provence (Cezanne's home Jas de Bouffan, Cezanne's studio, and Cezanne's quarry, Bibemus) - Here's Henry in the quarry listening to the guide who told us the geology, the art history, and the history of the quarry. Just after this we turned around and saw Mont St. Victoire  as Cezanne saw it. 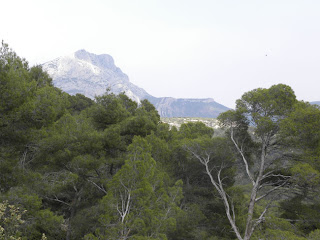 Vallauris and Castle Grimaldi (Picasso), here is a sample pot by Picasso, no pictures allowed in most places, but I got this one in Vallauris. The sculpture is in a nearby plaza.
There were amazing contemporary artists working in ceramics also. 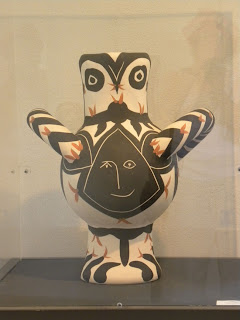 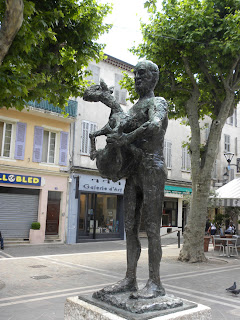 The Maeght Foundation (modern art especially Miro), here is a sample. Below is the facade with a mosaic by Chagall. Miro's work pays homage to the farmers who were still working there in the 1960s. He had an entire sculpture garden of work that needs a separate entry or a slide show. Braque had a tiled pool and stained glass. Every art work suggested new perspectives on old friends. 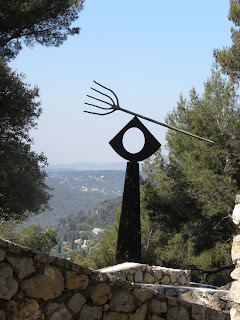 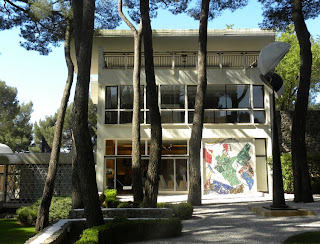 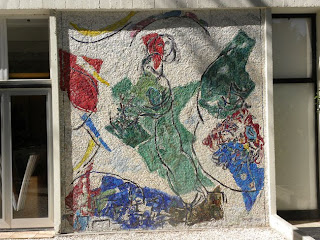 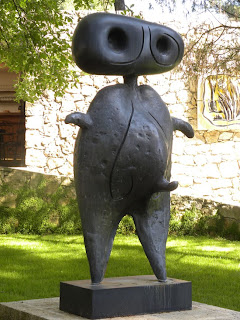 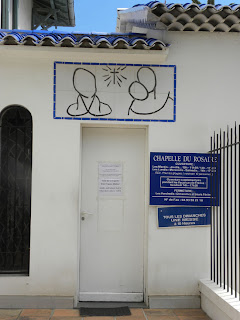 The Matisse Museum in Nice with joie de vivre, Sunday afternoon in France in the foreground. 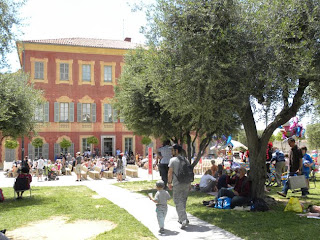 The Museum of Prehistory (wonderful website, you have to search for it in French Musee Prehistoire so here's a link) in out of the way Quinson, Verdon. We were so lucky to get in with the school children with my press pass, since it is closed on Tuesdays, the day we showed up. It was a high point of the trip for me. Interactive educational displays and state of the art media. They took us through the stages of human development based on a cave discovered nearby with remnants of human life starting 700,000 years ago. The stunning museum was designed by Norman Foster. The school children in France are studying evolution.  Here is also the earliest example of stone carving that they found in the cave. 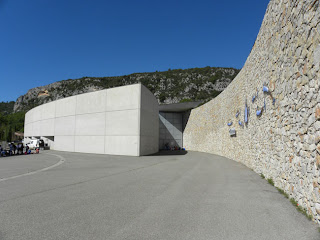 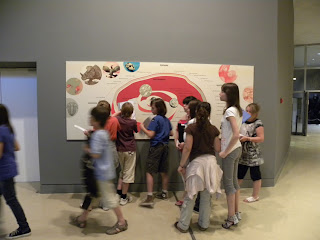 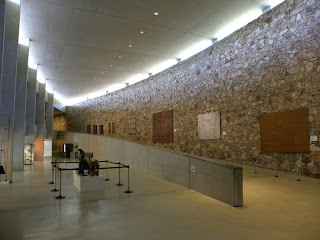 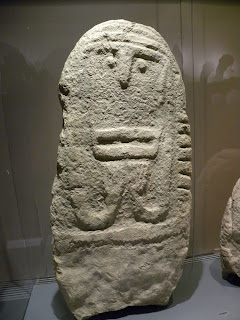 This was near the gorge of Verdon that we hiked in 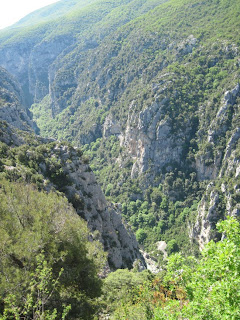 and the exquisitely beautiful town of Moustiere Ste Marie recommended by my good friend Romson Bustillo. Here is my salute to the good life in a small restaurant there. 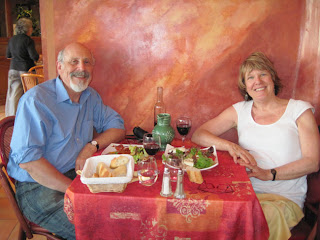 The Museum of Resistance in La Fontaine de Vaucluse, called Call to Liberty 1939 -45 told the story of Petain's capitulation to the Nazis, his cult, his sending of French men to work in German industries, and then the amazing resistance movement with its multiple identities, courageous participants, and its successes (sabotage) and failures (killing and persecution). It had a whole section on the artists in the resistance, especially writers, like Paul Eluard.
One poet memorized 140 poems while in prison and then wrote them down when he got out. 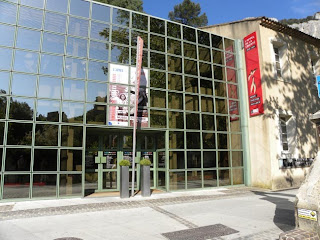 In Avignon there was a national strike in France and a great March in the main street ending at the Papal Palace. Of course that was another high point.The French socialists had the best chants and were thrilled to meet an American socialist ( that's me)  they didn't know there were any. The French were protesting the threatened cuts in benefits and pensions because of the economic crisis. Of course my personal ( absolutely unverified and unverifable) theory is that the privatization people wanted to force Europe to stop giving all those services, and the crash was a great way to force them into it. 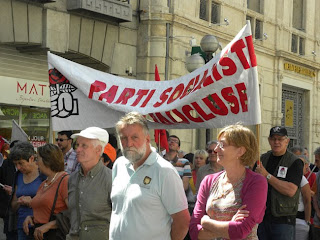 Seeing the art of these famous artists in the locations where they lived and worked was enlightening. (We missed out on Leger, that will have to be on the next trip).

They moved to Southern France when it was dirt cheap, one after the other, Cezanne came from there and never left, and he painted in his own back garden as well as a quarry and his studio. Amazingly limited geography. He was forced to the sea during the Franco Prussian war and painted the Meditaerranean "l'Estaque" like a big blue wall. No crashing waves for him. Van Gogh of course moved for the sun and color.

Matisse in Nice were a perfect match of light and color, Picasso went there in 1946 (having spent the war years in Paris) and spent three months painting with makeshift materials at the Grimaldi Castle. It is now a Picasso Museum right on the water, in what was a grim old castle. Today it is filled with light and air and an extraordinary group of paintings, many of them in tones of grey and brown.There is also a stunning group of black and white photographs of Picasso painting in the Palace, with Francois Gilot, the only woman who every left Picasso, from those same months.  And then there is Picasso's amazing pottery. He painted on preexisting pots in Vallauris and restarted the entire pottery production there.

Apparently he didn't like the fact that Matisse made a chapel for nuns at Vence. He was an atheist, but a very competitive one, so he did a chapel in Vallauris with War on one wall and Peace on the other wall. It has been closed down though. Here is War. Peace will come soon. Below is a photograph of the Chapel from the web. The murals are painted in a Romanesque chapel with a barrel vault and he painted it completely. Of course the formalists don't like any of Picasso's political work.
I've never even see these work reproduced before. Not part of the MOMA canon, that's for sure. 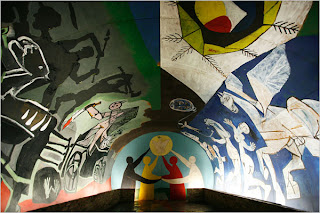 And then there is the Maeght Foundation. We went there on a perfect Sunday morning, blue sky, sun, green grass, the building designed by Jose Sert, the unity of artists, site, and spirit was perfect. Aime Maeght was close friends with the artists represented here, he supported them right after the war and they supported his museum. There is a unity of place, persons, art that is rare in the art world. It belongs to a lost time, the 1940s - 1960s, before the Cote D'Azur went crazy and became what it is today, a rich person's play ground.
We managed to find one tiny beach S Juan des Pins, that was public and had a picnic and took a quick swim. Apparently that is where the famous photograph of Picasso holding the umbrella over Francois Gilot was taken. 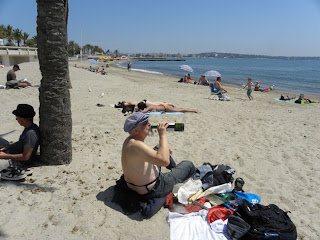 I didn't know that Matisse moved to Vence during the war, after the Germans occupied Southern France, or that his daughter was tortured by the Gestapo. I didn't know that the Resistance was centered in Provence because of the rugged countryside or that the US Allies bombed Avignon killing many civilians, in order to prepare for the invasion of France (sound familiar? ). I also didn't know that Picasso had lived in Aix following the footsteps of Cezanne and ended his life near Avignon. Right to the end he was soaking up other artists work. Matisse was always the man of pleasure that Picasso could never emulate, his line he said was "a description of the states of the soul". Picasso was always striving, stretching, and creating big failures as well as big successes.
His "three keys of Antibe" painted in pale gray on the wall of the Grimaldi Palace is simple mystery, perhaps a magic charm. I was not able to photograph it, but I did draw it. Maybe I can scan that.
I am on the emotional side with Picasso, but I can still enjoy Matisse. Cezanne I felt was so priviledged, how could he fail to be a success. All he had to do was paint! 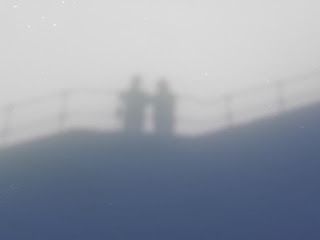 There will be  more pictures soon. Here we are reflected in the water from the famous Avignon Bridge