I just saw Shirin Neshat's first feature length film, Women without Men, 2009. It has won a lot of awards, at the Sundance Film Festival, at the Venice Biennale, and elsewhere. 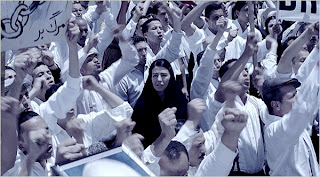 I wonder how many of the people giving awards and writing reviews have read the novel by Shahrnush Parsipur of the same title. This is the second novel by Shahrhush Parsipur that Neshat has used as a point of departure, the first was Touba and the Meaning of Night.

Parsipur seems to be supportive of the film, she is appearing in the photographs of the Silver Lion ceremony in Venice and she even plays a part in the film as the brothel madam.

The film is visually dazzling, Neshat's trademark, and her film is a logical direction from her early photographs, then the slow moving imagery of her installations, to now a feature- length film. Her husband Shoja Azari is also a filmmaker and collaborates with her. The film was shot in Morocco, with Casablanca as 1950s Tehran. This is a good review.

Women of Allah, her famous photography series in which she wrote the poetry of  the famous modernist Iranian feminist poet, Forough Farokhzad, on the hands and face of (herself) wearing a chador, was a response to a visit to Iran after many years. She was shocked at the changes from what she remembered in the late 1970s as a small child ( she left in 1979 at the time of the Islamic Revolution). Paying homage to a great poet as a visual artist is common in art from Iran, Iraq, Egypt, and other countries in which poetry has been more important than visual art. (I would like to avoid the inaccurate term "Middle East")

Her film Women without Men appeared almost at the same time as the Green Revolution, an amazingly fortuitous circumstance for its success. The cast and Neshat wore green and held up the peace symbol in Venice during the award ceremony in September 2009 for Best Director.

The film is pure Shirin Neshat. She has stunning  images of women in black chadors (she has a love hate relationship with chadors, she loves their visual effects, but not the oppression of wearing them.) A lot of her films include an emphasis on the black shapes of the chador.
I have heard Shirin Neshat speak, and she is very compelling. I can still remember her saying on a panel in Istanbul, " artists in Iran do not have the luxury to ignore politics."

On that note, the film's vortex is the politics surrounding the US coup of 1953 which overthrew a democratically elected government in Iran and reinstalled the Shah.
One of her characters, Munis, comes back from death and engages with the political activists who support Mohammed Mossadegh. They are represented as Communists, leafleting in the dark of night, resisting the supporters of the Shah in demonstrations in the streets.They are ultimately crushed both literally and metaphorically. That's Munis in the photograph above, floating in a sea of people, both there and not there ( she is after all resurrected from the dead.)

None of this is in the novel.
The sole reference to the coup in the novel is the date of the novel mentioned in the book, August 1953. There is unexplained turmoil in the streets. Munis is not a political activist, she simply visits a bookstore and reads some books.

Parsipur is a feminist novelist, she has been writing books and short stories since the late 1960s. Women Without Men was first drafted in the late 1970s, although published in the late 1980s. She was censored for referring to virginity and has spent time in jail. Her life has been both as an acclaimed Iranian novelist and as an exile since 1994 whose works are banned in Iran, an incredible tension. All of her novels include elements of the magical, the incredible, magic trees, magic women, women as trees,  ( if you saw Touba by Neshat, the woman became the magical tree, in her novel Women without Men, a woman plants herself and becomes a tree).

But the main theme of Women without Men, the novel, is women together in a special place. In that place, a house with an orchard, magical events occur. The novel is feminist, focusing on four women from different social classes, a prostitute, a sister of a repressive and religious brother, a religiously observant woman in love with that brother, and a wealthy woman who leaves her general husband and buys a garden and estate in the country in order to be free and do as she wishes, including writing poetry, which she does badly. ( In the film she is a singer).

The main theme of Women without Men the film, is the coup d'etat, the role of the United States, and people's lives at that time. Neshat brings together the military, the Shah reinstatement, and the magical orchard where the women live by having the military who are searching for communists after the Coup come to a party at the house in the orchard.

The parties in the book are not connected to the military, they are a celebration of life and the aspirations of Fakhri to be famous. In the film, she is attached like a mother to the prostitute Zarin who hovers between life and death;  in the book, Zarin marries the gardner and has a magical pregnancy ( becoming transparent), giving birth to a lily which is planted by the stream. Her mothers milk is given to the woman tree.

The place of music is crucial to the film. As the soldiers and officers sit at the table disrupting the party of the bourgeois guests who both support and do not support the coup, the tension is broken by the beautiful singing and playing of an elderly man. (earlier, before the soldiers arrived, the hostess Fakhri had performed herself).

So the question is what is the position of culture here?  I found it provocative, on the one hand it was soothing the oppressive military men, on the other hand it was disrupting their oppression.

The other question is, why did Neshat keep the same title as the novel for her book. Her film is about the tension between life and politics, between freedom and oppression, the novel is about complex relationships between women, between reality and fantasy. They are entirely different. In the book all four women are in the same place. Munis does not go back to Tehran.

But one cannot argue with Neshat's power to call attention to political issues in an aesthetic context. This is the most difficult achievement for art. I salute her for that. But for those who are looking for an Iranian film, they will have to look elsewhere. She has said she wants to convey the complexity of Islamic culture, but contemporary Iranian women say that she has been away too long ( she is also banned from Iran now). Iranian women that I know do not like her work. They find it annoyingly cliched and superficial with respect to Iranian society and Iranian women.They refer to her art as "chador" art, or "veil" art, holding the Western gaze to Eastern art.


I suggest Bidoun magazine, an outrageously amusing and clever contemporary publication on culture in the Middle East (they call it that) and Arteeast, an online journal that has indepth articles on a range of subjects.

Nonetheless, Neshat is the primary female Western-based artist who is so prominently addressing Iranian politics in art for the international art audience.  At least she is opening the door. The fact that we think all those chadors are what is happening in Iran then or now just shows how much we all have to learn.
Posted by Susan Platt at 5:05 PM