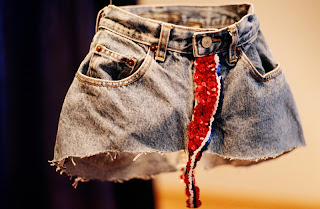 Of course, the powerful array of forces lined up in Juarez makes it difficult, but at least the gallery made a committment to making a statement and to publicizing the murders. If such an exhibition could take place in galleries all over the country it would really make a difference. Wake up Art World! Down with Narcissism.
Posted by Susan Platt at 3:35 PM

Thank you for linking to my photo; fantastic blog!