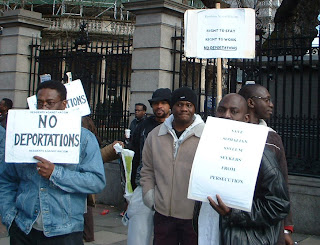 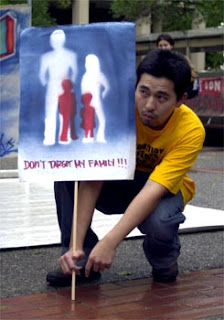 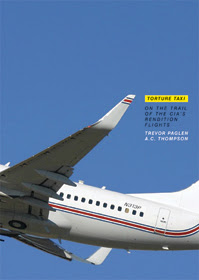 Deportations are part of the US today. We think of the Nazis deporting Jews to concentration camp, we think of the US sending the Japanese to prison camps in World War II, but today, in partnership with the anti immigrant frenzy is the deportation frenzy.
Few artists have addressed this subject, other than Chicanos, whose families have long been divided by arbitrary laws.

Today, the numbers are huge.
230,000 immigrants including young children are detained each year.
ANYONE who is not a US citizen can be deported, including refugees, student visa and business visa holders. longtime legal residents with green cards convicted of a first time criminal offense.
In 1996 Congress changed immigration laws eliminating due process protections for immigrants who wanted to challenge their deportation.
Many are detained in centers that look like, smell like and feel like prisons. Sometimes they are jails.
After 9/11 there have been more and more detentions and deportations.

We have heard most about the "extraordinary renditions" and the illegal status of prisoners at Guantanamo. Artist Trevor Paglen and Journalist A.C. Thompson who wrote Torture Taxi, have written about and photographed some of these illegal sites in other countries by tracing secret airplane records.
Making visible the invisible.
In Afghanistan, the prison near Kabul that they identified is now being expanded to bring in the prisoners from Guantanamo. These are the "war on terror" detainees.

We hear very little about the hundreds of thousands of other detainees of all nationalities, held inside the United States awaiting deportation. They can be locked up indefinately. They have little medical care, poor food, no phones. They are moved frequently to prevent contact with families and lawyers.
This is the other side of the racist frenzy that has seized the US.
Families are ripped apart, people are unable to live their lives.
Making visible the invisible is something artists contribute to a political catastrophe- theyat least put it on the radar of the general public. That is the power of art, one image tells so much. Comparing the two images at the top of the page, the man with the image of his family speaks volumes, the signs with texts are helpful, but do not carry the same effect.
The statistics and information on deportation and detainees is from Hate Free Zone www.hatefreezone.org, Immigrant Justice Network www.immigrantjusticenetwork.org and Southeast Asia Resource Action Center www.searac.org
Posted by Susan Platt at 10:56 AM