I am starting the New Year with a quote from someone who declares himself to be ignorant.

“But I can’t tell Jose Cuervo from Al Queda operatives by looking at them because they cut their beards off. It’s like trying to get fly manure out of pepper without your glasses on you know? I mean not a racist thing, but they’re all brown with black hair and they don’t speak English and I don’t speak Arabic or Spanish.” “Return of the Nativist,” New Yorker, December 17, 07.

This type of ignorance is the basis for many of the major problems facing the United States from the President down to the ordinary everyday racist like this man.

In searching for art online about immigration, I found a website of excellent political cartoons. Perhaps the subject is too far away from New York City and too complicated for most post modernists steeped in how to distance themselves from on the ground facts. Let me know if you know of artists addressing the subject!

Above is one of the dozens of cartoons at http://www.newsart.com/m/m48.htm. This cartoon is by Barry Maguire. 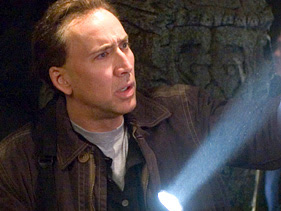 Ignorance manifested itself also in the Walt Disney big budget film National Treasure: Book of Secrets recently released. I went to see Helen Mirren as an action hero, and I wasn't disappointed, but the ignorance of Walt Disney studios, their willful laziness with respect to Mesoamerican culture and civilization is disturbing.
Suggesting that the hieroglyphs are pointing to a city of Gold is such a stereotype: it was the Europeans that were greedy for gold and pursued it as a form of capital, the Mesoamericans gave gold a different value, usually ornamental metalwork, a technique that was used hundreds of years after the Olmec. The City of Gold is called Olmec, when it is obviously a fantasy of Mayan and Aztec through the lens of Euro American obsession with gold.

The reference to human sacrifice (and was it different from the colonial slaughter or our own wars ?) and emphasis on gold, are simplistic distortions about a highly complex culture that predates Maya and Aztec by many hundreds of years. Mirren's character, as a professor, is hostile to treasure hunters, making a bow to the movie's own stereotypes. A quick read by either the set designers or the writers would have made the references more accurate and less cliched. One surviving type of Olmec artifact is colossal naturalistic heads which could easily have been used as a basis for the lost city in the movie.

But I guess feeding cliches to the American public is what Walt Disney is all about. (I say that sadly as I have to confess that my own father worked for Walt Disney in the 1950s as a consultant on Secrets of Nature. He brought me home a photograph personally autographed by Disney that I still own).

While National Treasure Book of Secrets may see itself as harmless, the perpetration of ignorance and stereotypes is never harmless. Granted, in the end, the Helen Mirren character miraculously transforms herself from a glyph specialist to the leader of a major archeological dig, and the main characters vindicate their ancestors rather than gaining personal wealth, but the over all message is find the - "precolonial" as they call it - gold.

Stereotypes and cliches perpetuate ignorance and racism. They can also lead to oppression and death as we see in the war in Iraq and on immigrants both Arab and Latino.